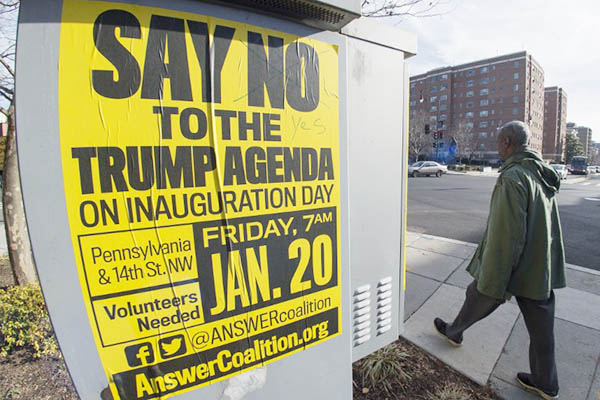 Hundreds of thousands are expected to participate in demonstrations for rights the president-elect’s critics accuse him of wanting to curb.

Demonstrations are scheduled across the United States, but the focal point of anti-Trump ire will be in the nation’s capital, where a small minority—several thousand—have pledged to disrupt the Jan. 20 inauguration ceremony.

The main protest will come the following day at 10:00 a.m.—the Women’s March on Washington, which is backed by celebrity A-list participants including Katy Perry, Julianne Moore, Cher and Scarlett Johansson.

It all began with a simple Facebook post from Hawaii grandmother and retired lawyer Teresa Shook to about 40 of her friends. Word traveled quickly, and eventually made it to the pro-Hillary Clinton Facebook group Pantsuit Nation, which has nearly four million members.

Now, nearly 190,000 people have said on Facebook they will attend. Another 250,000 said they were interested. “We expect elected leaders to act to protect the rights of women, their families and their communities,” organizers said in a statement.

Of course, a mass turnout is no guarantee, especially with temperatures often glacial in mid-January. But at least 1,200 buses have asked for parking permits at Washington’s RFK Stadium for the protest day—compared with just a few hundred for Inauguration Day.

Organizers have not specifically used the term “anti-Trump” to describe their efforts, but the message is clear. Bringing together “people of all genders, ages, races, cultures, political affiliations and backgrounds,” organizers say the protest march seeks to secure immigrant rights and access to abortion services, among other demands—things which Trump’s critics accuse him of wanting to curb.

Dozens of progressive organizations are supporting the event, with African Americans expected to make a strong showing. The Black Lives Matter movement, which has focused on denouncing police misconduct, is one of the participants—leading some who see the movement as too radical to withdraw from the Jan. 21 event.

Trump can expect to see lots of signs recalling some of his questionable interactions with women, including allegations of sexual assault, sexist comments and fat-shaming a former beauty queen.

The “Pussyhat Project” is hoping knitters will make one million pink hats with cat ears for protest participants. The play on words is deliberate: they are drawing attention to one of Trump’s more vulgar remarks, made in 2005 and caught on video but which only surfaced in October.

“When you’re a star, they let you do it. Grab them by the pussy. You can do anything,” Trump is heard bragging.

Getting approval for the march was not a given, with authorities limiting the number of permits handed out. Authorities are also somewhat on edge, with 28,000 security forces to be deployed when Trump takes the oath of office on the steps of the Capitol.

The march should start near Capitol Hill and head up the National Mall. Co-organizer Linda Sarsour said the event would be made accessible to the elderly, pregnant women and those with handicaps.

Protesters are using the hashtag #WhyIMarch to explain why they are heading to Washington—from calls for equality to initiatives to curb gun violence to pleas for health care reform. Nearly 300 “sister marches” have been organized in other U.S. cities—including New York, Boston, Los Angeles and Seattle—and around the world.

Beyond traditional rallies, other protest events planned nationwide include poetry slams and an “Art Strike” calling on museums and businesses to shut down on Jan. 20 to “combat the normalization of Trumpism.”