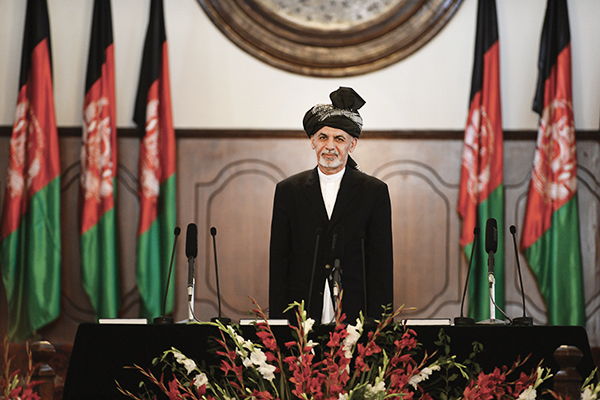 Four months after President Ashraf Ghani was sworn in, Afghanistan is still struggling to form a government, damaging the economy and miring the country in uncertainty as the Taliban insurgency continues.

The months of bitter fighting between Ghani and his poll rival Abdullah Abdullah that plagued much of 2014 were meant to have ended with the agreement in September to create a “national unity government.” But parliament’s rejection last week of most of Ghani’s cabinet nominees has cast his administration into uncertainty once again and is fuelling fears of fresh turmoil, analysts say.

M.P.s turned down all but eight of Ghani’s 25 picks for a range of reasons—from dual-citizenship to problems with educational documents and at least one nominee whose name was found to be on an Interpol wanted list. With parliament now on its winter break, Ghani must wait until late March before he can introduce new candidates to the legislators, dealing a blow to his pledges of reform. It means Afghanistan must get by for nearly two months with no permanent minister in several key posts, including defense.

“This is very troubling for Afghanistan, to not have a complete government at this critical time,” said Abdul Waheed Wafa, analyst and director of the Afghanistan Center at Kabul University. “People were hoping to see a strong and unified government, but with the delay and then rejection of most of the cabinet and its leaders in conflict with themselves, we know that is not going to fully realize anytime soon.”

Afghanistan faces an array of daunting problems, including a fierce and resilient Taliban insurgency, widespread corruption, poverty and growing unemployment among the country’s 30 million population, most of whom are young. The economy suffered during the months of deadlock that followed last year’s disputed presidential election.

According to finance ministry data, income in 2014 fell short of predictions by around 25 percent because the disruption caused by the lengthy election process reduced trade and investment.

In an interview with the BBC, former finance minister Mohammad Omar Zakhilwal said the deadlock had cost the Afghan economy around $5 billion, while the World Bank said GDP growth fell from 4.9 percent in 2013 to just 1.5 percent in 2014.

Some observers fear that without permanent ministers, there may be delays to international aid and development payments—on which the Afghan economy is heavily dependent.

Following the end of the U.S.-led NATO combat mission in late December, Afghan forces are also facing tough times against the still-resilient Taliban, toppled from power in 2001. The concern is that the ongoing political strife could weaken the 350,000 security personnel who last year repeatedly fought off Taliban attempts to gain territory—at a heavy cost of casualties.

“The successes and gains of the Afghan armed forces are dependent upon two factors,” said Haroon Mir, analyst and founder of Afghanistan’s Center for Research and Policy Studies. “First, continued and sustainable support from NATO and other international allies and second, good governance to reform security institutions, reduce corruption and eliminate political influence. Without these, it is difficult to imagine Afghan security forces can maintain its strategic gains in the long run.”

The insurgents have continued attacks in the bitter Afghan winter. Last week they killed three U.S. contractors at Kabul airport and at least nine people in a suicide bombing at a funeral in the east of the country. Violence is likely to surge in April or May as better weather heralds the start of the traditional Afghan summer “fighting season.”

In public, Ghani and Abdullah repeatedly talk confidently about the future of the new Afghan government and its ability to improve lives in the war-ravaged country.

Nazifullah Salarzai, Ghani’s chief spokesman, admitted to AFP that the cabinet rejection was a setback, but insisted the president would deliver on promises to fight corruption and enact reform. “This year may not be a easy year for Afghans … But we have identified the problems and have strong will and determination to bring reform and ease suffering,” he said. But many Afghans remain skeptical. Nourullah, a student at Kabul University, points to the months it took Ghani and Abdullah to resolve their differences.

“I am worried that we will have a government weakened with infighting between the president and the CEO, while we know the Taliban and other terrorists are waiting at the corner to strike,” he said.