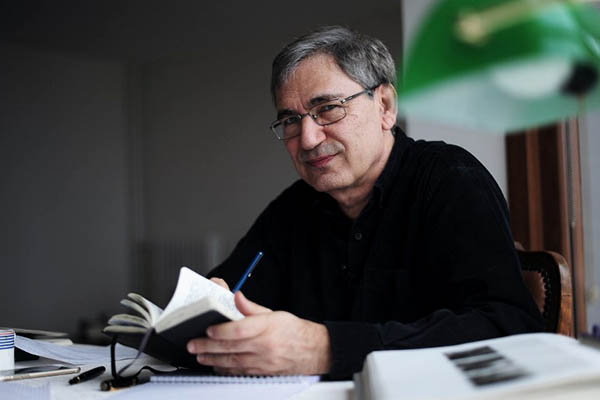 Submerged in his new novel, Turkey’s Nobel Prize laureate Orhan Pamuk gazes out over the city of Istanbul, the main protagonist of his books, keeping a troubled eye over the development of his country.

Pamuk, author of best-selling modern classics including the My Name is Red and The Museum of Innocence, has for some three decades been the face of modern Turkish literature at home and abroad. His novels, translated into dozens of languages, won him the 2006 Nobel Prize in Literature—but also the sometimes unwelcome status as the moral voice of a fast changing nation.

Receiving AFP for an interview at his Istanbul apartment overlooking the Bosphorus, Pamuk made clear he wanted to be seen as a novelist and not reduced to a secular opponent of Islamic-rooted President Recep Tayyip Erdogan. “Not only [do] I have to maneuver myself to fight with the government but I also have to hear people’s demands,” he said. “In a way, anyone who is in trouble or feels that the government is not doing well for them wants me to rightfully represent their problems. My [Nobel] prize didn’t make my life easy but of course I’m happy to deal with all these problems.”

Compared to “generations of writers” in Turkey who were jailed, exiled or even killed, “I feel myself very lucky,” he said.

He expressed discomfort with media interviews, saying that after discussing literature for half an hour and politics for 20 minutes what is ultimately broadcast is one minute of literature and 20 minutes of politics.

Sitting behind a desk piled high with books, Pamuk’s view takes in almost two millennia of Byzantine and Ottoman history in Istanbul—the Golden Horn, the Ayasofya and the Blue Mosque. Taking pains to speak in precise and accurate English, Pamuk said his last published novel, A Strangeness in My Mind, was an attempt to show a changing Istanbul through the eyes of one character.

The story is about a street vendor who sells items including boza, a traditional drink made from fermented wheat “that people enjoy at night and associated with Ottoman-ness, Turkish-ness and romantic dreams of Ottoman life. On the other hand, my character … shows the reader how this city—street by street, shop by shop, window by window—changes.”

When the book begins in the 1970s, Istanbul’s population was just two million, but now it is up to 16 million, he noted.

Whether Pamuk is writing about 20th century Turkey (as in The Museum of Innocence) or mediaeval times (as in My Name is Red), the city of Istanbul has almost been the main character in his works. “For me, the sense of Istanbul is Bosphorus, history, a palimpsest of civilization, with monumental buildings and a continuous construction where people built and complain, complain and complain but enjoy their … modern life. Which is all the contradictions that define Istanbul.”

Pamuk may be reluctant to be seen as a political figure, but he remains unequivocally critical of Erdogan who has boasted of transforming the country into a “new Turkey” with ambitious building projects. He said that the ruling Justice and Development Party (AKP) was “destroying the balance of powers, which is in fact the key to any democracy.”

“In that sense, Turkey is only a electoral democracy, but a democracy where the respect of human rights, free speech are violated every day.”

Pamuk leaves Turkey every year to teach for a semester at New York at Columbia University and said he could sense the change when he returned last. “When I came back, I felt a climate of fear, people whispering.”

Commenting on Turkey’s recent history, from coup-happy generals to Erdogan, he said: “Authoritarian soldiers were [pushed] out, [an] authoritarian and Islamist government took their place.”

Erdogan and the AKP have dominated Turkey’s highly diverse society for over a decade but have been facing unprecedented challenges after 2013 mass protests followed by stunning corruption allegations against the elite. “In a sense, the mystery of political Islam vanished because of the convincing power of corruption allegations,” said Pamuk.

He is far more reticent when asked to comment on the mass killings of Armenians by Ottoman forces during World War I, a tragedy which Pamuk had in 2005 labeled a “genocide.”

Those comments, which broke a longstanding taboo on the issue by any prominent Turkish figure, brought him death threats as well as legal proceedings that were eventually abandoned. “I had a lot of trouble eight to 10 years ago because I talked freely about this subject.”

For now, Pamuk is focusing on putting the finishing touches to a new novel, which he says will be a surprise for some readers. In typical Pamuk style, it tells the story of a well digger in Istanbul and his apprentice and is “allegorical.”

But this time there is a difference. “The whole problem here is that this time I want to write a short novel, and break the heart of my traditional readers who always tell me to write a long one,” he said.