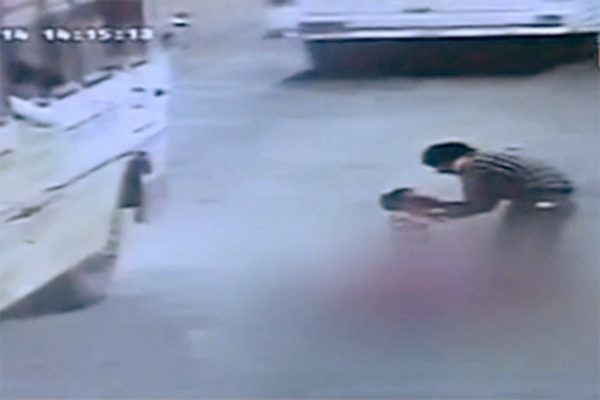 In India, passersby cruelly ignore the heart-rending pleas of an injured man and his 4-year-old son.

Video footage of a man being ignored as he begged for help following a road accident that killed his wife and child led to accusations of “shameful” public apathy in India on Monday.

Police said Kanhaiya Lal’s appeals were ignored for 40 minutes after a speeding truck rammed his motorcycle on Sunday, which was also carrying his wife, Guddi, 26, their 10-month-old daughter, and 4-year-old son.

Lal’s wife and daughter died of their injuries at the accident scene while the man screamed for help with his son, who was also injured, CCTV footage aired nationwide on Indian television showed. The footage recorded motorists speeding past the stricken family until a city worker finally came forward to help.

“It’s the duty of all people to take such victims to hospital because lives could be saved,” Jaipur traffic police chief, Lata Manoj, said in a televised interview.

Prabhu Dayal, an uncle of the dead woman, blamed the deaths on public indifference. “Her husband cried for help for 40 minutes but no one stopped. It’s shameful that apathy took two lives,” he said.

Public apathy toward crime victims was brought into sharp relief in December, when a 23-year-old student was ignored by bystanders after she had been stripped and dumped on a New Delhi street, having been savagely gang raped in a bus by six men. She died of her injuries nearly two weeks later.

“Following the gang rape we did an online survey about why people don’t help victims of violence and accidents,” said Apurva Mahendra of the Delhi-based SaveLIFE Foundation, which encourages bystanders to offer assistance. “We found legal issues, such as being required to appear in court as witnesses, are major deterrents for good Samaritans to come forward to help such victims,” said Mahendra, who heads the privately-run agency’s emergency response program.

A total of 131,834 people died in road accidents in India in 2011—which works out at 15 an hour, according to the government’s National Crime Records Bureau. Traffic experts say the lives of at least 50 percent of victims could be saved if they received timely medical attention.

“We are advocating a good Samaritan law to oblige people to help victims,” said Mahendra.