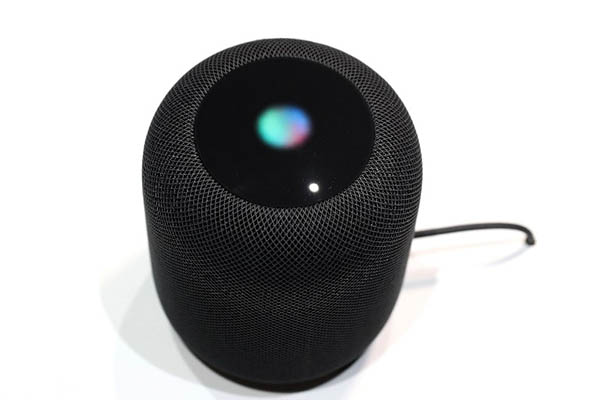 Powered by Siri, the HomePod will serve as a smart home and music hub

Apple on Monday unveiled its ‘HomePod’ speaker as it moved to challenge Amazon Alexa and Google Home as a smart home and music hub.

HomePod, powered by Apple’s Siri digital assistant, will be priced at $349 when it begins shipping in December in the United States, Australia and Britain, the tech giant announced at its annual developers conference. “It’s so cool, we really believe it is going to take your home music experience to the next level,” Apple chief executive Tim Cook said of the new device.

HomePod will be taking on Amazon Echo and Google Home, which have been building momentum in the market for voice-controlled speakers capable of controlling smart appliances, fetching content from the Internet and more.

HomePod is designed to work with the Apple Music subscription service and can produce rich sound while tapping into the artificial intelligence power of Siri.

Apple vice president Phil Schiller said the Siri team at Apple had tuned the assistant into a “musicologist” that learns the tastes of listeners and gets songs from the Internet cloud. The speaker has the “power to rock the house,” according to Schiller, who said the team worked to make HomePod an potent assistant for news, messages, weather, traffic, home controls and more.

HomePod capped a keynote presentation at Apple’s Worldwide Developer Conference that included updates to its iPad and Mac laptop lines, and upgraded operating software enabling augmented reality for iPhones and iPads. Analysts said Apple is playing to its strength in the music industry by focusing on sound quality and its catalog of songs available on HomePod.

“Apple is smart to frame the HomePod as a music-centric and audio-centric device rather than just another smart speaker or another home for Siri,” said Jackdaw Research analyst Jan Dawson. “The fact that Apple is claiming to marry really great and smart audio with a smart assistant and cloud music service makes this device unique in the market so far.”

Some industry insiders, however, note that Apple will be under more pressure to improve the computing smarts of its Siri software in the face of offerings from rivals Google and Amazon.

Amazon has dominated the category of connected speakers since 2014 when it introduced its first Echo, which responds to voice commands and allows users to order goods or rides and control connected appliances. A survey released last month by research firm eMarketer found Echo speakers held 70.6 percent of the U.S. market, compared with 23.8 percent for Google Home and 5.6 percent for others including Lenovo, LG, Harmon Kardon and Mattel.

Cook used the Apple keynote to show off new iPad and Mac computer models, as well as provide glimpses at coming versions of the software powering the technology titan’s devices. Apple senior vice president of software engineering Craig Federighi said the next Mac operating system would be named “High Sierra” in tribute to the California mountain range.

High Sierra features will include being able to stop unexpected videos from starting to play automatically when landing on web pages and “intelligent tracking prevention” that will prevent ads from following people about the Internet.

High Sierra will be released later this year as a free update, according to Federighi.

Along with upgraded versions of iPad and Mac laptops, Apple provided look at an iMac Pro work station that had the computing built in behind the screen and was touted as the most powerful computer the company has ever made. The iMac Pro was to begin shipping in December with a starting price of $4,999.

Apple told the developers they were overhauling the App Store, giving it a fresh look, and beginning to add the floor plans of shops and airports to its mapping program.

Apple also released a software kit so developers could infuse augmented reality into applications for iPhones or iPads. Given the hundreds of millions of Apple mobile devices in use, that will create the largest augmented reality platform in the world “overnight,” executives said.

Ministry of Power Claims Center Not to Blame...