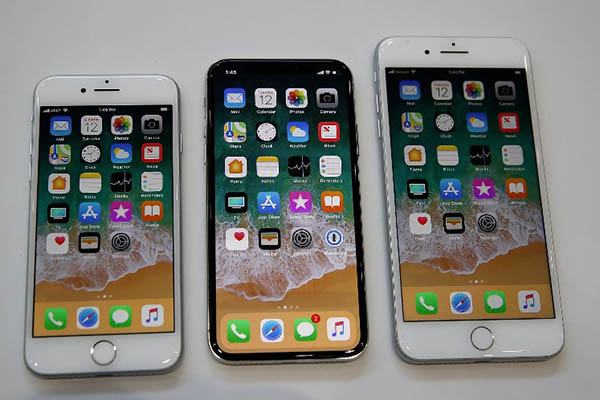 Apple laid claim to the future of the smartphone on Tuesday with a 10th anniversary iPhone X, touting the device as the next generation of mobile computing.

The iPhone X was one of three new iPhone models unveiled at the first event at Apple’s new “spaceship” campus, as the California tech giant sought to spark fresh momentum in a global smartphone market seeing slowing growth and tougher competition.

Apple chief executive Tim Cook, speaking at the inaugural event at the new campus theater named for late Apple co-founder Steve Jobs, said the newest flagship handset is a milestone for the company a decade after the first iPhone release. “Ten years later, it is only fitting that we are here in this place, on this day to reveal a product that will set the path for technology for the next decade,” Cook said, calling the iPhone X “the biggest leap forward since the original iPhone.”

The iPhone X has an edge-to-edge 5.8-inch “super retina” display that has improved resolution, and uses facial recognition to unlock the device.

Apple upped the ante by boosting the starting price of the new handset to $999 for U.S. customers. It will be available starting Nov. 3 in more than 50 markets.

“I think it will have very strong appeal to the Apple core and the high-end market,” Reticle Research analyst Ross Rubin said of iPhone X. Rubin believed that payment installment plans and price subsidies or promotions offered by carriers would mean the iPhone X “won’t be a big stretch” for people in the market for premium smartphones.

Apple also unveiled a new iPhone 8 and iPhone 8 Plus, which offer more modest improvements over their predecessors and will sell later this month at starting prices of $699 and $799, respectively. All three new handsets will be capable of wireless charging and are adapted for augmented reality with more powerful processors and cameras. The also had memory space boosted in a nod to modern day demand for storing rich data like video.

The unveiling comes with Apple seeking to recapture the magic of the first iPhone release in 2007 as it struggles to maintain market share.

Analyst Patrick Moorhead of Moor Insights & Strategies called the new flagship iPhone X “an engineering marvel, especially when compared to the iPhone 7 and iPhone 8.” Moorhead said the handset “is not just a late copy of the competition. Apple did it their way by perfecting the experience.”

Jan Dawson of Jackdaw Research called the iPhone X “a far bigger upgrade” than previous devices, but questioned whether Apple was stretching its market too thin. “What Apple doesn’t want is for people to want the best but not be able to afford it and therefore hold onto their existing phones rather than buying what they consider second best,” Dawson said in a blog post.

For the iPhone X, Apple developed what it called an A11 Bionic chip as part of a system that lets handsets recognize owner’s faces to unlock screens or pay via the Apple Pay mobile payments system.

Apple is touting the edge-to-edge OLED display—the organic light-emitting diodes used in high-end televisions—to win over customers. “For more than a decade, our intention has been to create an iPhone that is all display,” Apple chief designer Jony Ive said in a statement. “The iPhone X is the realization of that vision.”

The iPhone 8 models boast upgrades from the prior generation handsets. They have Bionic chips, improved cameras and are made with “aerospace-grade aluminum” and durable glass, according to Apple.

Apple’s success with the iPhone has transformed it into the world’s most valuable company, but it is struggling to keep its share of an increasingly competitive smartphone market. Chinese electronics colossus Huawei passed Apple in global smartphone sales for the first time in June and July, taking second place behind South Korean giant Samsung, according to market tracker Counterpoint Research.

Samsung last month unveiled a new model of its Galaxy Note with a similarly high price tag as it seeks to mount a renewed challenge to iPhones. Other makers are also scrambling for market share, including Google, which is expected to soon unveil a second-generation of its flagship Pixel smartphone.

Apple unveiled an updated version of its smartwatch, as it claimed the device had become the top-selling watch in the world ahead of rivals such as Rolex and Fossil.

The Apple Watch Series 3 has its own mobile connectivity that allows users to remain connected without a smartphone for phone calls, music and other functions. Also unveiled was a new generation Apple TV, this version of the set-top box updated to stream ultra-rich 4K video from the internet.

Apple is working with Hollywood studios as well as streaming television providers such as Netflix and Amazon Prime to bulk up the library of 4K shows or films, according to Cook.

While hardware grabbed the spotlight, Apple also emphasized behind-the-scenes technology such as augmented reality, machine learning, and linking to the array of smart devices in homes. “Apple is trying to differentiate through design and experience,” Rubin said. “There is a lot of emphasis on Apple technologies positioning us beyond the phone.”