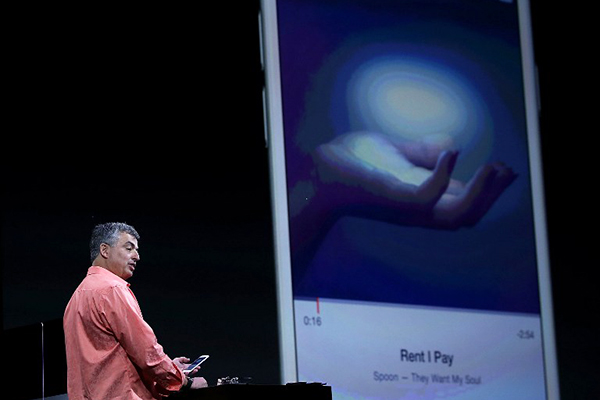 In its bid to become a power in music streaming, Apple is devoting its vast resources to create what it hopes will be a first truly global radio station.

The $750-billion company, whose iTunes revolutionized how disparate parts of the world buy music, launches Apple Music on June 30 as it sees consumer trends shift to streaming, which allows on-demand and unlimited content online.

At the heart of the strategy is Beats 1, which bills itself as a first global radio station and will be available in more than 100 countries. Beats 1 will be free even without a subscription to Apple Music, whose streaming platform costs $9.99 a month after a trial period—a key distinction from streaming leader Spotify, which offers a free tier for on-demand music despite criticism from some artists.

Apple Music has sought to make a splash through big names on Beats 1, poaching the influential New Zealand-born D.J. Zane Lowe from BBC Radio 1. The company has not named a full list of presenters, but Lowe in a profile by The New York Times said that pop icon Elton John, “Happy” singer and producer Pharrell Williams, rap mogul Dr. Dre and prominent indie rocker St. Vincent had all been enlisted to host shows. Williams will debut a song for the launch of Apple Music, which enjoyed a dramatic boost when superstar Taylor Swift said she would stream her blockbuster album 1989 only on Apple Music. (Swift made the announcement days after threatening to boycott Apple Music for not paying royalties for streams during the free-trial period, quickly leading the company to reverse itself.)

Even if Apple is a major power in music, music is a small part of the company’s bottom line. The iTunes store and other services made up less than 9 percent of Apple’s revenue in the quarter through March 28. To many analysts, the concerted—and without doubt pricey—push into streaming and radio is aimed less at dominating the music industry than at promoting Apple’s key earner: iPhones.

Beats 1 “reinforces the cultural relevance of Apple as a fashion brand. Music is central to pop culture, and music is all about musicians and artists,” said Mark Ramsey, a media strategist and author of two books on the radio industry. He said that Beats 1 will offer Apple Music a public face—an asset sorely lacking for Spotify, whose most identifiable figure is Daniel Ek, its young Swedish chief whose style is more investor than rock star. But Ramsey said that Apple Music could ultimately benefit Spotify and other rivals, especially those with free tiers, by introducing streaming to the uninitiated. “If Apple Music boosts the market for streaming radio, it’s going to float all the boats,” he said. “Here it is, a major technology provider with a very loud, strong global voice essentially putting its stamp of approval on this category.”

Beats 1 marks a revival of the human element in streaming radio, although it also allows listeners to generate stations through algorithms based on their preferences.

Days before Beats 1 goes live, rival Google Play announced its own online radio station with a human dimension. It uses the model of Songza, the service bought last year by the search-engine giant through which real people help select listeners’ playlists. But Google Play will only be available in the U.S. Likewise Pandora, the Internet radio leader which creates stations based on algorithms, is officially available only in two countries outside the U.S.—Australia and New Zealand—owing to the maze of regulations on radio around the world.

While Beats 1 aims to be global, it will broadcast from just three cities—Los Angeles, New York and London—which are often considered the world’s pop music capitals, but leave the vast majority of the world uncovered.

Cortney Harding, a consultant to music startups and a former editor at industry journal Billboard, said not to underestimate the appeal of traditional radio with its mix of local news, weather and event listings. “People still respond to that. So I think [Beats 1] is going to do well, I think it’s going to be interesting; I don’t know that it’s going to be that massive,” she said.