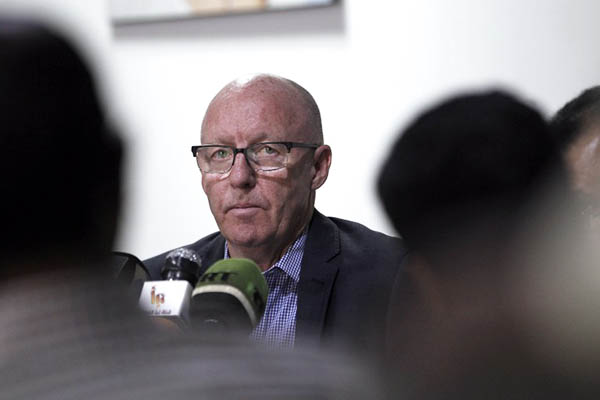 The Saudi-led coalition accused Yemeni rebels of repeatedly breaching a ceasefire on Thursday, the first day of a truce under global pressure to end a war that has killed thousands.

At least 11 people were killed in sporadic clashes between rebels and pro-government forces, despite all sides insisting they will pause the fighting. The truce, for an initial period of three days, took effect just before midnight on Wednesday to allow sorely needed aid deliveries in Yemen where the conflict has also left millions homeless and hungry.

The Saudi-led Arab coalition intervened in March 2015 to support the government of President Abedrabbo Mansour Hadi after Houthi rebels overran much of the impoverished country on the southern tip of the Arabian Peninsula. Five previous truce attempts failed but cautious optimism preceded the current pause after intensified international pressure following an escalation of combat.

But Major General Ahmed Assiri, the coalition spokesman, told AFP, “there is no ceasefire at all” because of repeated rebel breaches. “This is the same situation as the previous time when we called for a ceasefire,” Assiri said. And Saudi Arabia’s foreign minister told reporters in Washington that rebels were stepping up their attacks.

“As of this morning Washington time there had been more than 150 violations by the Houthi-Saleh side,” Adel al-Jubeir said, referring to the rebels and forces loyal to former president Ali Abdullah Saleh.

Saudi Arabia and Washington accuse Iran of arming the Shia Houthi insurgents, but Tehran denies the charges. The coalition and Hadi both vowed to abide by the ceasefire despite alleged violations by the rebels.

Pro-government forces declared “respect for the truce” but reserved the right to respond to infractions. The rebels said they would respect the ceasefire as long as “the enemy” abides by it, but urged their fighters to be ready to retaliate against “all aggression.”

The coalition says it will continue an air and maritime embargo, to prevent weapons shipments to the rebels, and maintains airborne reconnaissance.

At dawn, coalition aircraft flew twice over the rebel-held capital Sanaa without conducting raids, according to residents, who said they have had enough of failed ceasefires. “They’re mocking us with a three-day truce,” said Ali al-Doush, a 32-year-old civil servant who has not been paid for three months. “We want an end to the war.”

Nearly 6,900 people have been killed, more than half of them civilians, while another three million are displaced and millions more need food aid. The deaths on Thursday included three civilians killed in a coalition air raid on Saada province, a historic Houthi stronghold, rebel-controlled media said.

Assiri denied that any airstrikes took place over Yemen, although coalition warplanes carried out surveillance. He said a Patriot missile shot down a missile fired by rebels in Marib, east of the capital Sanaa.

A man and his daughter were wounded in a cross-border attack from Yemen in the kingdom’s Jazan region, Saudi civil defense authorities said. Assiri said coalition artillery and aircraft retaliated.

“We will respond to each violation. We will be reactive,” he said. “It’s so easy. If they stop, we will not fire a bullet.”

Official Saudi media said there were more than 43 rebel violations along the border. Military sources and residents said there had also been fighting around the besieged third city Taez, and pro-Hadi positions came under fire in Sarwah, east of Sanaa.

The last ceasefire attempt began in April and collapsed as U.N.-brokered peace talks broke down in August. Fighting then escalated, until an Oct. 8 coalition airstrike, which the U.N. said killed more than 140 people and wounded at least 525 at a funeral in Sanaa.

On Thursday a panel of U.N. experts concluded the strike was in violation of international humanitarian law, accusing the coalition of failing to take “effective and adequate precautionary measures to minimize civilian casualties.”

In the wake of the incident the United States announced an “immediate review” of its intelligence and refueling assistance to the coalition, whose investigative team said the funeral was “wrongly targeted.”

The U.S. Navy also for the first time struck rebels directly earlier this month, hitting radar sites which Washington said were involved in missile launches against a U.S. warship and other vessels.

The ceasefire does not apply to jihadists who have exploited the conflict to gain ground in the south. Suspected Al Qaeda militants on Thursday killed four soldiers at a checkpoint in the southern province of Abyan, a security official said. One attacker was killed and another wounded.