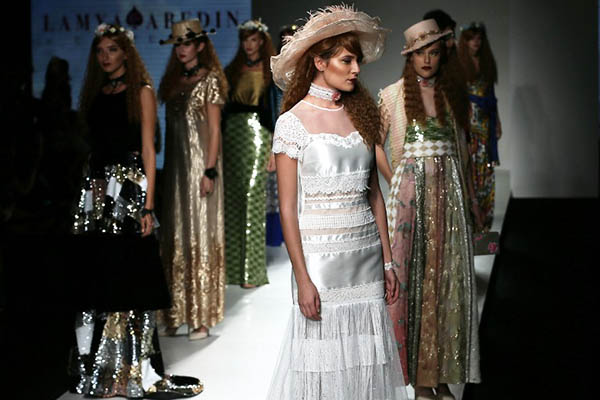 Arab Fashion Week opened on Thursday with hopes of establishing Dubai as a top destination for the “ready couture” genre and as a major fashion capital.

It is the first time that a fashion week has been dedicated to the form, described by organizers as a blend of haute couture and ready-to-wear or pret-a-porter.

For the first time in the region, the five-day show will also present a unisex collection signed by Rad Hourani, a Canadian-Jordanian designer known for his genderless creations.

The fashion week opened with a “ready couture” collection for women from Emirati designer Lamya Abedin in the first of more than 20 Spring/Summer 2017 collections from more than 10 countries. The collection drew applause from an audience of mostly women—some in mini-dresses and others covered from head to toe in the black traditional Abayas and even a niqab.

The show ended with Abedin’s young daughter taking to the catwalk with a model in a peach-colored lace wedding dress.

Now in its third edition, Arab Fashion Week aims to attract fashion conscious women from the Gulf, as well as luxury-orientated buyers from Russia and China. The event, founded in 2014 to represent the fashion industry in the 22 countries of the Arab League, introduced “ready couture” after an in-depth study of the market, Abrian said.

The form follows in the footsteps of limited ready-to-wear collections that can be customized, from famous fashion houses Roberto Cavalli and Dolce & Gabbana, he said.

AFC spokeswoman Daline Eluar said the group “aims to strengthen the role of the U.A.E., through Dubai, to become the fifth international fashion capital alongside New York, London, Paris and Milan.” The fashion week seeks to show the world that the Arab region is not just “war and conflicts” but also “creativity, art and beauty,” she said.

The Gulf city state is a growing tourist destination, a magnet for investors and home to one of the world’s largest shopping malls. “Dubai has become a fashion capital after international capitals” attracting tourists and designers alike, said Emirati haute couture designer Maryam al-Shaibani who spoke to AFP after the opening show.

The cosmopolitan city state has been spared the wave of unrest that has rocked other Arab countries since 2011.

Abrian said the AFC wanted to “tailor peace through fashion” by promoting Arab designers and attracting Western brands to manufacture in the region.

During the week, the council will promote a Jordan-based initiative to set up the Arab world’s first factory able to manufacture garments to international standards, he said. The initiative is part of a drive toward setting up a creative economy based on the region’s art and culture within 10 years, he added.

But much remains to be done, Abrian said, as customers still trust Western designers over their Arab peers. “Everything that comes from Paris, from Milan is more appreciated,” he said.

The AFC hopes to counter this by promoting brands that are “made in Arabia.”

Shaibani however appeared more optimistic. “International designers are starting to enter the world of Arab fashion designing” by creating garments such as traditional Abayas worn by women in the Gulf region, she said. “This means that we have reached the world.”

Early this year, Italy’s Dolce & Gabbana launched their first line of hijabs and Abayas for Muslim customers in the Middle East. Islamic fashion will be on display throughout the event with brands from Malaysia and Indonesia, at a time of growing controversy in the West over Muslim women’s clothing.

“We believe that Islamic wear is very important and international brands are targeting” it, said Abrian, adding that Muslim spending on fashion could reach $500 billion annually by 2019.

Another Two Cases of Coronavirus Confirmed in Sindh