Home Latest News ‘Are We Not Pakistanis?’

‘Are We Not Pakistanis?’ 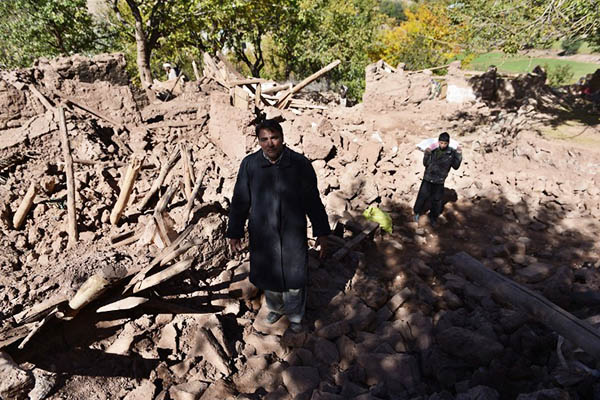 Desperate survivors bracing for a fourth freezing night in the rubble of their earthquake-flattened homes appealed for aid Thursday as the Pakistan government said thousands more houses had been damaged than previously thought.

With winter fast approaching in Pakistan’s worst hit province of Khyber-Pakhtunkhwa, survivors said they and their children were running out of time.

“After Nov. 15 there will be three to four feet of snow here and we have nothing to protect us,” said Mir Wali, whose village Charun Ovir is 10,000 feet up in mountainous terrain in Chitral.

Dust is still rising from the mountain after the earthquake caused cracks in it, leaving villagers fearing a landslide or collapse. “Are we not Pakistanis?” he said. “Today we need Pakistan.”

The government must act before the snow falls, he said. “After that the roads will be blocked and we won’t be able to save our children.”

On Thursday, Pakistan’s National Disaster Management Authority (NDMA) announced on its website a spike in the number of houses damaged in the quake, from nearly 14,000 to more than 25,000. More than 15,000 of those were in Khyber-Pakhtunkhwa alone.

For days, authorities had been struggling to reach the most isolated communities in the mountainous region, but the NDMA said Thursday it believes it has reached “most of the affected area.”

Pakistan’s confirmed death toll so far stands at 272, with more than 2,000 people injured, but a spokesman said the NDMA was still in the process of estimating a final toll.

In Afghanistan, authorities have put the death toll at 121 with some 8,000 houses damaged—but there are fears the number of dead could still spike, with charities warning that the Taliban presence was hindering access to many of the affected areas.

UNAMA official Mark Bowden said it appeared NGOs had the capacity to help after the quake, but that access to the areas “varies from one [insurgent] commander after another.”

Desperate survivors were left marooned on mountaintops in Badakhshan, the remote province where the epicenter of the earthquake was located and where insurgents control much of the territory. In Sawkay district in the badly-hit Afghan province of Kunar, residents said Wednesday that no officials had yet appeared.

“The government has not asked what happened to us,” said resident Mohammad Akram. “No government official visited us.”

The quake was centered near Jurm in northeast Afghanistan, 250 kilometers from the capital Kabul and at a depth of 213.5 kilometers, the U.S. Geological Survey said. Aid agencies have stressed the need for greater disaster preparedness in war-torn Afghanistan—but it has been a low priority for the nation as it struggles to end a 14-year war against the Taliban insurgents.

Local officials in Chitral district in Khyber-Pakhtunkhwa said they had few supplies to hand after the region was devastated by floods just three months ago. “We usually have our own stock but we already consumed it during the floods,” said Muhammad Bahadur, an official in the village of Darosh.

Bahadur’s village had just 70 tents on hand when the quake struck, he said. “Around 2,500 houses have been completely destroyed… Imagine how we can satisfy the need with only 70 tents?”

Mir Wali in Charun Ovir said the village had no electricity, no clean drinking water, and no medical facility. Officials had handed out 49 tents to share between 150 to 200 households, he said.

Other survivors are already planning to leave if they do not receive help soon.

Shahroon, a Chitral villager, said if the government can help them rebuild before the snow comes they will stay. If not, he said, “we will go to Rawalpindi or Peshawar or any other city and spend our lives begging on the roads.”