Home News Galleries Are We There Yet?

Are We There Yet? 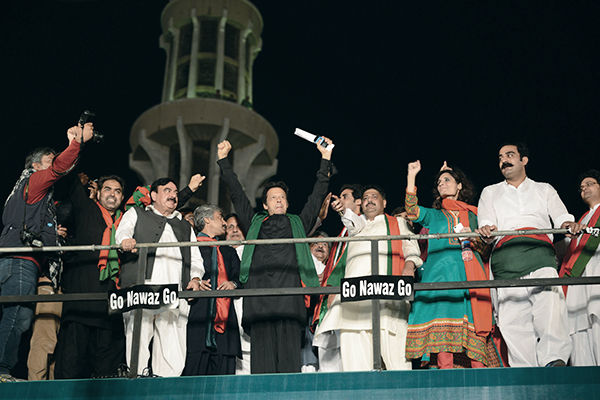 Pakistan Tehreek-e-Insaf’s October 2011 Lahore rally marked its arrival as a force to be reckoned with. The party’s even more impressive Sept. 28 protest in the same city appears to mark the beginning of the next election cycle. Coming a week after the party’s Karachi rally, also impressive by that city’s standards, the Lahore spectacular has forced talking heads and political rivals to reassess their take on the PTI and its single-minded chief, Imran Khan. Since Aug. 14, Khan has mostly been camping out in front of Parliament in Islamabad, alleging wholesale rigging in the Punjab in last year’s elections and demanding the resignation of Prime Minister Nawaz Sharif. His “Go Nawaz, Go!” campaign has gone viral, embarrassing Sharif’s colleagues and signaling the rapidly changing public mood. By all accounts, Khan’s Oct. 2 rally in Mianwali was also historic. It was attended by some 100,000 people, including, unusual for the city, thousands of women. But the renewed consensus that the next polls will come well before 2018, when Sharif is meant to complete his term, has come elliptically. No one quite knows how Pakistan gets there, but, pundits and pols are convinced, get there it will.

Good God. All you have not done in this article is to not have declared Imran Khan a prophet. Yellow journalism at its best!