Armani Looks to the Future 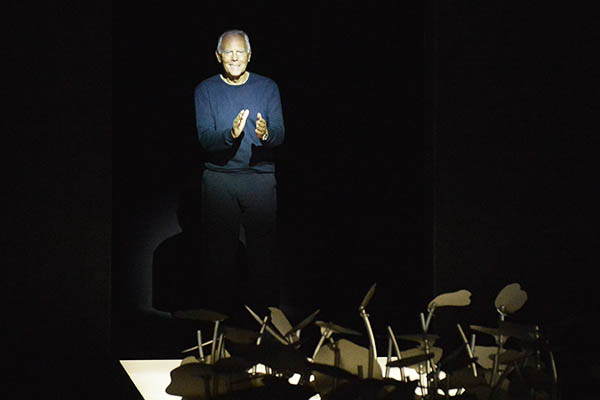 81-year-old fashion industry giant reflects on his past, and future, in new autobiography.

Giorgio Armani had three important things to say on Monday: yes, he can do colors other than grey and beige, no, he is going nowhere and no, he has not had a nose job.

The first point was made by his Spring-Summer 2016 womenswear collection, an unexpectedly colorful affair suffused by various hues of red (flame, lacquer and geranium, since you ask). The second and third were made by Armani himself at the launch of a self-penned book about his extraordinary life and career, told largely through a total of 410 pictures, many of them previously unpublished snaps from his private archive.

Among them is one of him as a baby—looking remarkably similar to how he does today, at the age of 81. Asked why he had chosen that image for the cover, the designer replied: “Yes, there was a reason for that: the nose. Many have said, quite impertinently, that Armani had a nose job and that it made him look younger. Well, that nose you see there is the same as this one.”

Armani also found impertinent a question about where he imagined his multi-billion-euro empire being in 30 to 40 years. That did not however stop him answering in terms that suggest that, while he has begun planning for what happens after he has gone, retirement is not on his immediate agenda.

“In any case I won’t be there,” he said, admitting that, without him at the helm, it might be difficult for his company to remain the independent, private structure it is now. “Independence is a beautiful thing. You can choose everything from the light you have in your office to the kind of fashion you make. But independence also means having the means to preserve your independence. As long as I am alive, I think, independence will be there. After, immediately after, perhaps we will prepare the ground for a more modified, more controlled independence. But it will depend on what fashion is at that time and the position we find ourselves in.”

Asked if he could imagine anyone replacing his as the guiding creative force at the company, he joked: “My ego would say of course nobody would ever work like Armani,” before conceding: “There are talents about.”

He doubts however that anyone could come in and run the company from top to bottom as he has done for the last 40 years. “Things have changed so much. A new designer must be creative and supported by a commercial organization. Otherwise it is too tough.”

Armani’s latest collection reflected much that was seen elsewhere at the latest Milan fashion week, which concluded Monday. The master of understatement made much use of on-trend overlapping, sometimes transparent, layers to create what he termed an “ethereal silhouette.”

But it was still unmistakably Armani.

Where his Milanese rivals have used diaphanous materials to expose midriffs, breasts and upper thighs, Armani deployed them to offer glimpses of yet more sublime fabric underneath. Or he used embroidered lines, bands and motifs to ensure modesty was preserved. Bare backs and shoulders recurred, often under over-sized brimmed and wavy hats while wedge sandals accentuated the new tone Armani characterized in his collection notes as a “silent revolution” and a statement about a new “strong and powerful” femininity.

“Sensuality is here,” the notes said. “But never in a way that is unsophisticated.”

The overall feel was best summed up by a grey skirt suit worn with what resembled the most delicate of transparent red petticoats—worn under the collar-less jacket and over the skirt.