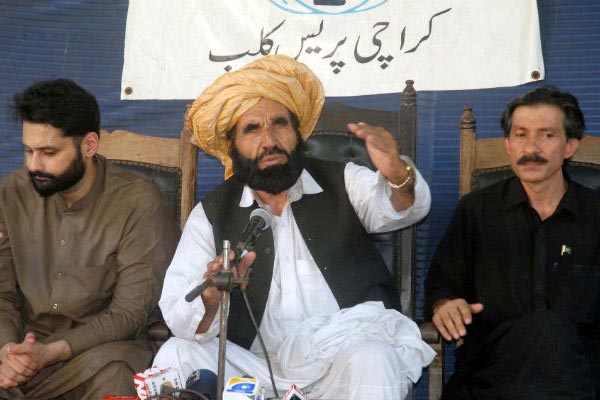 The father of Naqeebullah Mehsud, Mohammad Khan, at the Karachi Press Club

Mohammad Khan, whose son was killed in a staged police encounter last year, dies of cancer

Army Chief Gen. Qamar Javed Bajwa on Monday issued condolences on the death of Mohammad Khan, the father of a man who was killed in a staged police encounter in Karachi last year.

Maj. Gen. Asif Ghafoor, the spokesman of the armed forces, said on Twitter that the Chief of Army Staff had expressed his “heartfelt grief on the demise of Mohammad Khan father of Naqeebullah Mehsud.” The Army chief added that “efforts to ensure provision of justice as promised to him [Khan] shall be pursued.”

Khan, a resident of South Waziristan, had been pursuing the murder case of his son since his killing in January 2018. In a tweet, activist Jibran Nasir, who has campaigned to secure justice for Naqeebullah, confirmed that Khan had died of cancer. The deceased’s funeral prayers would be offered on Tuesday (today), he added.

Naqeebullah was one of four people killed in a police ‘encounter’ led by former SSP Rao Anwar on the outskirts of Karachi last year. After public outrage erupted over the killings, Anwar claimed aspiring model Naqeebullah had been a member of the Pakistani Taliban but this allegation was refuted by a militant spokesman, who said the deceased had no links to his group.

A year after Naqeebullah’s death, in January 2019, an anti-terrorism court in Karachi declared as innocent all four men killed in the encounter. In March, Anwar and 17 others were indicted for the murder of Naqeebullah in the staged encounter.