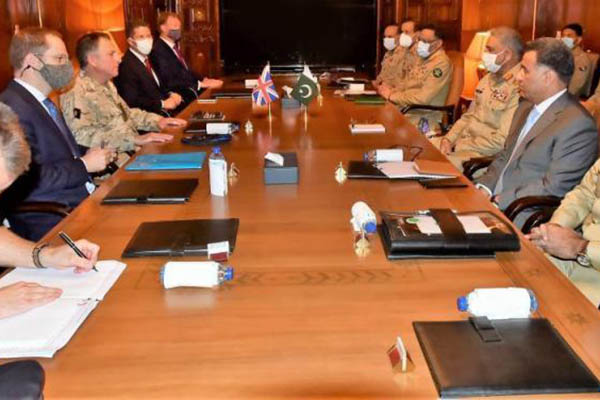 The Inter-Services Public Relations (ISPR) said that in addition to the U.K. military official, the Chief of the Army Staff had also met Benedict de Cerjat, the Switzerland ambassador to Pakistan.

“Matters of mutual interest, including strengthening of bilateral security and defense cooperation between the two armies were discussed during the meeting,” read the statement. It said that the visiting dignitary had acknowledged the Pakistan Army’s continued efforts for regional peace and stability, especially Pakistan’s efforts to achieve a lasting peace in Afghanistan, and its ongoing efforts in the fight against terrorism.

“The dignitary … pledged to further improve” bilateral ties between the U.K. and Pakistan, the ISPR added.

Also on Monday, the ISPR reported that security forces had conducted an intelligence-based operation in Mir Ali, North Waziristan. It said that 2 terrorists of the Aleem Khan Khushhali Group had been killed, adding that they had been involved in killing Malik Raees, a resident of Mir Ali, on Oct. 18. “These terrorists were also involved in many terrorist activities and were wanted by police,” it added.