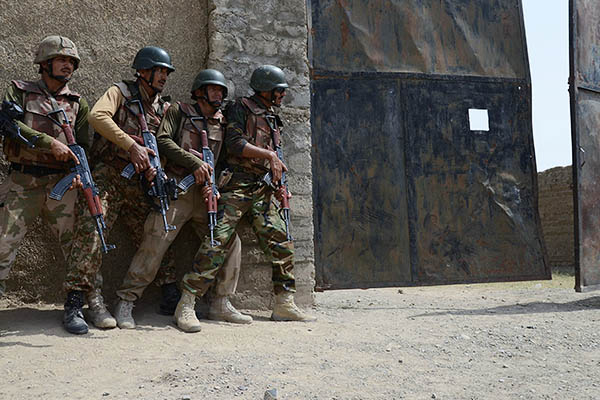 Miranshah bazaar bombarded by airstrikes as aid agencies step up efforts to help the influx of IDPs.

Pakistan’s military shelled a strategic town on Thursday in the latest round of its offensive against Taliban militants in the country’s restive northwest, as aid agencies scaled up relief efforts for refugees.

The heavy bombardment of Miranshah, the main town of North Waziristan, began at 6:00 a.m., according to local intelligence and military sources. It comes after nearly two weeks of air raids on militant targets as part of an operation aimed at wiping out longstanding militant strongholds in the area, which borders Afghanistan.

A full assault by ground troops has been expected for some days and the intensification of the shelling could indicate that it is now imminent.

Almost half a million people have fled North Waziristan in anticipation, with many flooding into the nearby town of Bannu and tens of thousands crossing into Afghanistan. The World Food Program on Thursday announced it was stepping up its efforts to provide the displaced with rations including wheat flour, high-energy biscuits and vegetable oil, expanding into other towns near Bannu, according to a statement. The United States Agency for International Development (USAID) has meanwhile donated $5.5 million to the relief effort, the statement added.

In Afghanistan, the International Organization for Migration said it was coordinating with authorities to mobilize relief for refugees who had crossed the border to Khost and Paktika provinces. Many of these refugees are Afghans who had either migrated to North Waziristan or move back and forth across the border. “This large influx of vulnerable people into the border areas of Afghanistan is of serious concern to the humanitarian community,” said the agency’s country head Richard Danziger.

Apart from the civilian refugees, many insurgents have also been seen by residents and officials escaping across the rugged, mountainous border, which is thought to be partly why resistance to the operation has been relatively light. The military says 361 militants have been killed in the Zarb-e-Azb offensive, although the number and identity of the victims are impossible to verify.

Twelve security personnel have been killed and on Tuesday North Waziristan suffered its first suicide bombing since the operation began. Two soldiers and a civilian died in the blast, claimed by the Ansar-ul-Mujahideen militant group, a Pakistani Taliban faction, who declared that it was the start of a counter-offensive. Hours after that blast unknown gunmen opened fire on a passenger jet as it came in to land at Peshawar, killing one person on board.

The Army said: “12 terrorists surrendered” to security forces in North Waziristan on Wednesday.

The assault on the militant bastion of North Waziristan, long urged by Washington, was finally launched after a dramatic attack on Karachi airport that killed dozens of people and marked the end of a faltering peace process.