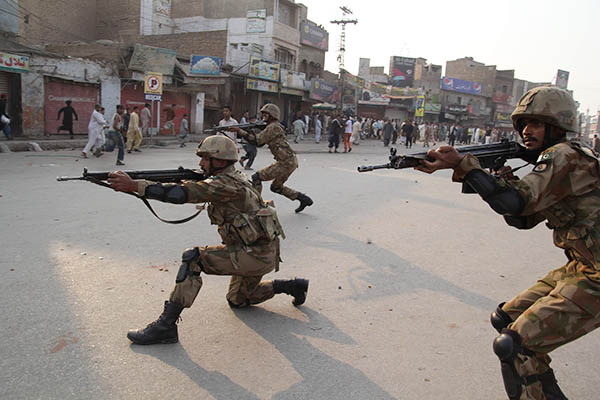 Nine people killed, nearly 90 wounded in riots across the country.

Pakistan called in its Army Saturday to quell sectarian unrest in three cities, after nine people were killed and nearly 90 wounded in violent attacks across the country, according to officials.

Authorities imposed a curfew in Rawalpindi, where sectarian clashes on Friday left nine people dead and more than 60 injured, and spawned retaliatory violence in at least two other cities.

Deeba Shehnaz, a spokeswoman for rescue services, said: “According to the latest figures, we can now confirm the death of nine people from the sectarian violence [in Rawalpindi] on Friday. At least 68 others were wounded during the clashes.”

Violence also erupted in Multan and Chishtian, where civil authorities called in troops to maintain law and order. A senior police official in Multan said that at least 12 people were injured when Sunnis took to the streets to protest the Rawalpindi incident, leading to clashes with Shias who fired warning shots in the air. In neighboring Chishtian, a Shia mosque was partially damaged and several shops were destroyed when Sunnis torched it in retaliation for the violence in Rawalpindi.

Shahbaz Sharif, chief minister of the Punjab, of which Rawalpindi is a major city, told an official meeting following the clashes that the government will ensure that culprits for the clash are brought to justice. “We condemn the act of violence in Rawalpindi and sympathize with the aggrieved families. We will take the culprits to task,” he said in his statement.