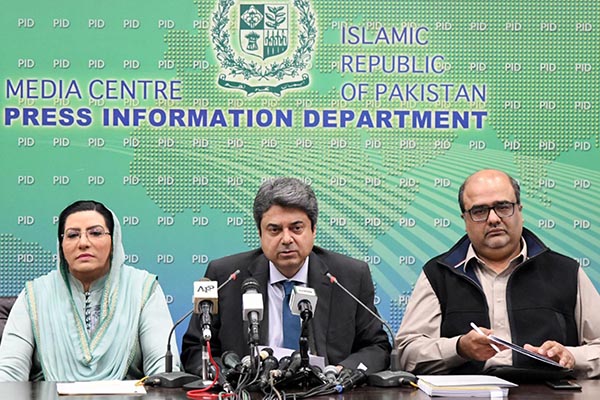 Both the Pakistan Tehreek-e-Insaf-led government and the military on Thursday issued angry rejoinders to the language of the detailed judgment in the high treason case against former Army chief Pervez Musharraf.

The offending text appears in paragraph 66 of the verdict. It states: “We direct the law enforcement agencies to strive their level best to apprehend the fugitive/convict [Musharraf] and to ensure that the punishment is inflicted as per law and if found dead, his corpse be dragged to the D-Chowk, Islamabad, Pakistan, and be hanged for three days.” Seth alone advocated the brutal punishment, with Justice Shahid Karim saying it was “unconstitutional” and Justice Nazar Akbar offering a dissenting note that the prosecution had not convincingly argued the case against the former president.

Special Assistant to the P.M. on Information Firdous Ashiq Awan, Law Minister Farogh Naseem and Special Assistant to the P.M. on Accountability Shahzad Akbar represented the government in its press conference. They announced that government had decided to file a reference against Justice Seth in the Supreme Judicial Council under Article 209 of the Constitution. They said the federal government would also challenge the judgment in the Supreme Court.

Naseem said existing laws related to the crime of high treason, including Article 6 of the High Treason (Punishment) Act, 1973, and The Criminal Law Amendment (Special Court) Act, 1976, did not permit any judge to direct authorities into committing “unconstitutional” acts such as dragging a person’s corpse at D-Chowk and then hanging it there for three days. “It is beyond my understanding under which authority a judge can give such a despicable and unethical observation,” he said, adding this kind of language hurt the people’s confidence in the impartiality of the judiciary. “This is an attempt to take Pakistan into dark ages,” he added.

He said former Chief Justice of Pakistan Naseem Hasan Shah had already issued judgments finding ‘public hanging’ against the Constitution and the principles Islam. Interestingly, while the government has offered a vociferous denunciation of the language of the verdict, it has never sanctioned or even discouraged its own ministers from making similar remarks. Earlier this year, Water Minister Faisal Vawda suggested something similar, saying all “corrupt” should be tied and dragged behind vehicles before being hanged.

Naseem said the government would approach the SJC to sanction Justice Seth, claiming his observations in the high treason verdict had proven he had no authority to hold such an esteemed judicial position. “I request senior judges of the Supreme Court and High Courts to restrain him from carrying out any administrative and judicial duties as his observation shows that he is mentally ill and incompetent,” he added.

Akbar, meanwhile, said the government believed the trial was concluded in haste ignoring procedural and constitutional flaws. “Trial in absentia cannot be conducted and it has never happened in the history of Pakistan,” he said, though a Supreme Court judgment in April established that a trial could take place in absentia if the convict were a proclaimed offender—which Musharraf had been declared after continuously refusing to return to Pakistan to personally record his statement in court.

The special assistant said it was the responsibility of guardians of law to create harmony among state organs. “Unfortunately the author of paragraph 66 committed a suicide attack on his own institution,” embarrassing the whole nation. The decision had not only damaged the judiciary’s reputation, but also raised questions on its credibility, as the Constitution mandated the judges to interpret the Constitution and implement laws, he added.

Earlier, military spokesman Maj. Gen. Asif Ghafoor also addressed a short press conference, wherein he said the detailed judgment had vindicated the military’s concerns over the short order issued on Dec. 17. He said the words used in the verdict were beyond humanity, religion, and values.

“We very well know how to uphold the dignity of the institution… God willing we will protect both the country and the pride and prestige of the institution,” he said, cryptically referring to “efforts to weaken us internally.”

The military spokesman said the Army chief and Prime Minister Imran Khan had also discussed the situation and decided to offer a united front to all threats.

The adversary wants to “provoke us to fight against each other” and in this way fulfill its “dream of defeating Pakistan,” he said, seemingly branding the judiciary an enemy of the state without directly identifying them as such. “If the country today needs the sacrifice, performance and the unity of the institution, we will not fail it by falling to the conspiracies of the enemy,” he added.

Former Army chief Pervez Musharraf was this week sentenced to death for high treason over his abrogation of the Constitution in 2007. The government and military have both claimed due process was not followed, with several senior officials questioning how a “patriot” could be a “traitor.”