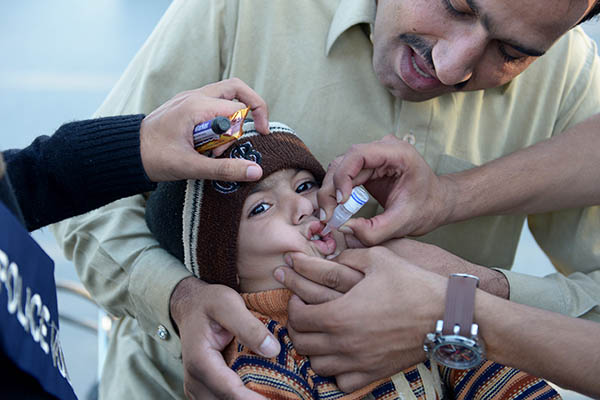 Troops will also be deployed at checkposts along the border to ensure all travelers are vaccinated before they exit the tribal region.

The Government of Pakistan has directed the Army to provide security to polio vaccinators in the tribal areas to ensure eradication of the debilitating disease, according to Ayesha Raza Farooq, the coordinator for the national anti-polio vaccination program.

“This is good news for the people of the tribal areas, where [tens of thousands of] children have been deprived of polio vaccinations for the past three years due to security concerns,” she said. “In order to comply with the World Health Organization’s recommendations, and eradicate polio from the country’s tribal areas, considered a hub for the disease, Prime Minister Nawaz Sharif has instructed Army chief Gen. Raheel Sharif to deploy troops with teams of polio workers,” she added.

“I have briefed the prime minister on the difficulties volunteers face in launching a vaccination campaign in Waziristan,” she said. “He took serious notice of the issue and assured me the government will take any measures required to eradicate the poliovirus,” she added.

Dr. Janbaz Afridi, deputy director of the Expanded Program on Immunization that is responsible for distributing the vaccine, said the government’s initiative was a great step. “This is really good news,” he told Newsweek. “The Army’s presence at the border crossings of the tribal areas should ensure that any families leaving that region can be properly vaccinated,” he added.

Over two million children across North and South Waziristan have not been vaccinated against the poliovirus since it was banned in the region in 2012. “The militants of the Mullah Nazir Group [a local militant commander who was killed in a drone strike in 2013] banned polio workers from their territory until the government ends U.S. drone strikes,” said Siraj Khan, a local government official. “The Pakistani Taliban also spoke out against the vaccinations and banned them following the issuance of fatwas that the vaccine could cause infertility,” he added.

Earlier this month, WHO declared a “public health emergency” and recommended temporary preventive measures for 10 states at risk, including Pakistan, Cameroon, and Syria. These countries have been urged to ensure all travelers are immunized against the virus to prevent its spread. Islamabad has already introduced vaccination counters at international airports. Pakistan’s National Assembly on May 13 also passed a unanimous resolution, urging every legislator to ensure polio vaccination in his or her constituency.

The tribesmen are not idiots that they need any help to get their children vaccinated for Polio.In today’s global village even the most remote ad backward areas have access to all kind of information. They should be able to combat with the TTP and other terrorists for the protection of their children.

Army has many other responsibilities to provide protection from natural and man made disasters. They should not be burdened with additional duties. PTI government hasfailed to fulfill its duties regarding Polio drive in the province. We must hold the KPK government for this neglect.