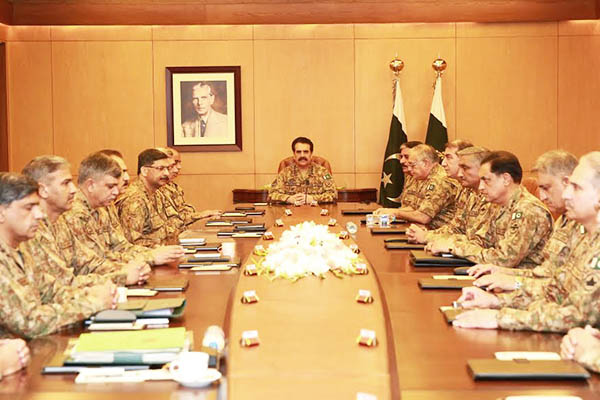 The fighting continued Sunday between police in riot gear and a few hundred protesters. Many protesters came armed with batons and slingshots loaded with marbles.

Shipping containers were set ablaze, several vehicles were torched, and hundreds of tear gas canisters lay strewn on the ground on Islamabad’s normally pristine Constitution Avenue after almost 24 hours of battle. By nightfall on Sunday protesters were preparing for fresh clashes, breaking up the road to use chunks as missiles and preparing crude gas masks from cloth and plastic bottles.

Opposition groups marched to the capital on August 15 demanding Sharif’s resignation, triggering a crisis that has raised the specter of military intervention.

During a Corps Commanders Conference at the Army’s headquarters in Rawalpindi, top commanders reviewed the situation in Islamabad “with serious concern” and reaffirmed their support for democracy, according to the ISPR. “The conference reviewed with serious concern, the existing political crisis and the violent turn it has taken, resulting in large scale injuries and loss of lives. Further use of force will only aggravate the problem,” it said in a statement issued after the meeting. According to the ISPR, the military has urged the government to resolve the situation “politically without wasting any time and without recourse to violent means.”

The prime minister has also convened an extraordinary joint sitting of Parliament on Tuesday after presiding over a high-level meeting, a cabinet minister told AFP. “The meeting strongly condemned the desecration of state institutions and declared it undemocratic and unconstitutional,” the minister said.

Opposition leaders claim the 2013 elections that swept Nawaz Sharif to power were rigged, though local and foreign observers rated the polls as relatively fair and credible.

Speaking from the roof of a shipping container Sunday, Khan said: “Now I ask all Pakistanis: rise up against this government. This is not a constitutional government—they are killers. We will continue until our last breath. I urge all Pakistanis to come out.” The cricketer-turned-politician added that he would file murder charges against the prime minister over the violence.

The security situation has deteriorated in the capital.

Small groups of protesters blocked the main expressway linking the city to the airport and forced traffic to a halt by putting tree branches and rocks on the road and pelting vehicles with stones.

A group of up to 15 teenage protesters armed with bamboo sticks and rocks attacked a vehicle carrying three United Nations staff members near the protest zone. “Their vehicle was damaged but they escaped unhurt,” a U.N. source told AFP. In Lahore around 300 Khan supporters burnt tyres and attacked the Metro Bus service in the Model Town suburb where the prime minister has a private residence.