Home Latest News Around 1,000 U.S. Troops to be Withdrawn from Syria

Around 1,000 U.S. Troops to be Withdrawn from Syria 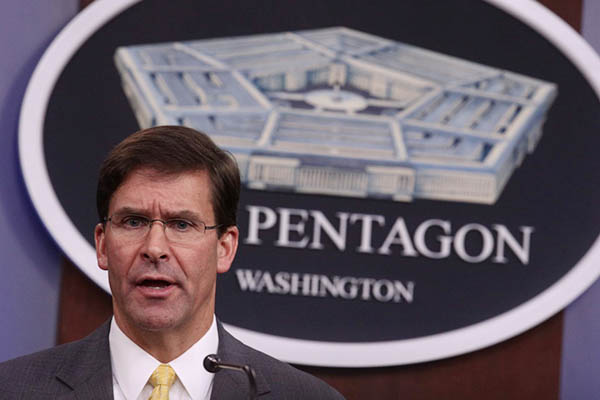 The Pentagon said on Sunday President Donald Trump had ordered the withdrawal of up to 1,000 troops from northern Syria—almost the entire ground force in the war-torn country—amid an intensifying Turkish assault on Kurdish forces.

Defense Secretary Mark Esper said the move came after the U.S. learned that Turkey was pressing further into Syria than expected. The Kurds—with whom the U.S. partnered to combat the Islamic State group—later announced they had reached a deal with the regime in Damascus to deploy Syrian troops near the border to confront the Turkish offensive.

“We have American forces likely caught between two opposing advancing armies and it’s a very untenable situation,” Esper told CBS’s Face the Nation. “So I spoke with the president last night after discussions with the rest of the national security team and he directed that we begin a deliberate withdrawal of forces from northern Syria.”

Esper said he was unable to provide a timeline because of the changing situation on the ground, but added that the withdrawal would be carried out in a “very safe, deliberate manner.”

“It’s a very terrible situation over there, a situation caused by the Turks… Despite our opposition they decided to make this incursion into Syria,” Esper told CBS. “And at this point in time in the last 24 hours we learned that they likely intend to expand their attack further south than originally planned and to the west.”

Esper also pointed to a possible deal—confirmed later on Sunday by the Kurdish administration in northern Syria—on a Syrian troop deployment near the border with Turkey to help the Kurdish-led Syrian Democratic Forces (SDF) confront Ankara’s offensive.

The U.S. withdrawal announcement came after its troops came under artillery fire Friday, which the Pentagon said was from Turkish positions. Asked if troops would be leaving the country altogether, Esper clarified that the withdrawal was just from northern Syria, “which is where most of our forces are.”

Fighting raged on Sunday along the border on the fifth day of an offensive that has provoked an international outcry and left dozens of civilians and fighters dead. Ankara launched the long-threatened offensive against the SDF, which it considers “terrorists” linked to insurgents inside Turkey, after Trump ordered special forces serving as a trip wire against Turkish action to pull back from the border.

The withdrawal provoked a bipartisan firestorm of criticism in the U.S. and accusations that Trump was abandoning a loyal ally in the fight against I.S. militants. “The president is simply derelict in his duty as president. He is making Americans much less safe, he is undoing years of work to curb [I.S.],” top Senate Democrat Chuck Schumer said in a statement on Sunday. “He is making America more susceptible to terrorism by his actions.”

Trump hit back, describing the U.S. withdrawal as “very smart.”

“The Kurds and Turkey have been fighting for many years… Others may want to come in and fight for one side or the other. Let them! We are monitoring the situation closely. Endless Wars!” he said.

Hundreds of relatives of foreign jihadists have escaped from a displacement camp in northern Syria, Kurdish authorities said on Sunday, as the number of people fleeing the Turkish assault soared to 130,000.

Ankara’s offensive sparked fears that thousands of I.S. fighters held by Syrian Kurdish forces could break free. Trump tweeted on Sunday that “the U.S. has the worst of the ISIS prisoners,” but added: “Turkey and the Kurds must not let them escape.”

Treasury Secretary Steven Mnuchin announced on Friday that Trump had authorized—but not yet activated—new sanctions to dissuade Turkey from further offensive military action. “We can shut down all U.S. dollar transactions with the entire government of Turkey,” Mnuchin told ABC on Sunday. “It’s something we may do. There’s full authority and something at a moment’s notice the president can tell me to do.”