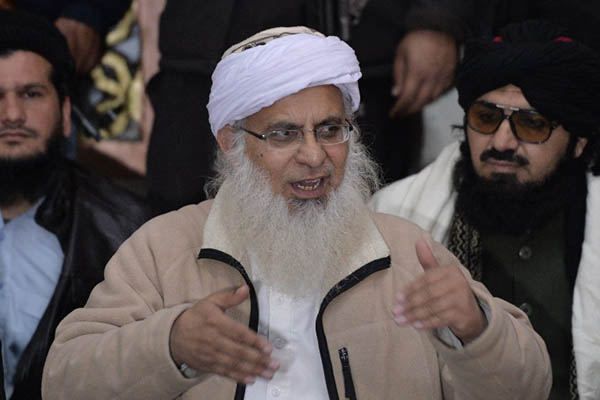 Lal Masjid spokesman says they will resist any move to arrest the pro-Taliban cleric.

A civil court has issued an arrest warrant for a hardline Islamic cleric who allegedly threatened people criticizing his suggestion that the massacre of school children in Pakistan’s worst ever terror attack was understandable.

Maulana Abdul Aziz, the pro-Taliban cleric and head of the Lal Masjid in Islamabad has been accused of threatening civil society activists, who this week staged several demonstrations outside the mosque, according to a police official and a spokesman for the mosque. The protests were staged to denounce Aziz, who refused to condemn the massacre on a television talk show.

Later, Aziz effectively told worshippers the attack in Peshawar, which left around 150 people dead, was a justifiable reaction to the Army’s “un-Islamic” operation against militants in North Waziristan. “O rulers, O people in power, if you will commit such acts, there will be a reaction,” he told worshippers in a sermon last week, prompting further protests accusing him of being a Taliban sympathizer.

“Police have received the court order and we are trying our best to implement it,” said a police official, requesting anonymity, as he was not authorized to talk to media.

Hafiz Ihtesham Ahmed, a spokesman for the Lal Masjid accused civil society activists of pressurizing police to register a case against Aziz. “This case has no grounds, so we will resist any move to arrest Maulana Abdul Aziz,” said Ahmed.

Pakistan has described the bloody rampage in Peshawar as its own “mini 9/11,” calling it a game-changer in the fight against extremism. The Tehreek-e-Taliban Pakistan (TTP) claimed the assault as revenge for an ongoing military offensive against its strongholds in the tribal northwest.

The Lal Masjid, which stands a stone’s throw from Parliament in the center of the capital, was the scene of a week-long military siege against radicals which left more than 100 people dead in 2007. Earlier this month female students affiliated with the mosque issued a video statement praising the Islamic State group and calling on it to avenge the death of Osama bin Laden. The women belong to the Jamia Hafsa madrassah, which in April named its library in honor of the slain Al Qaeda leader.