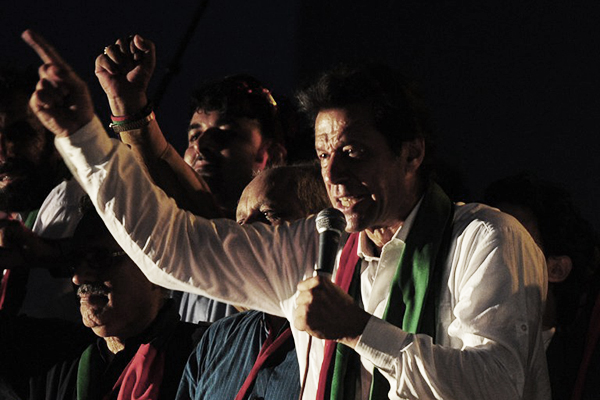 None of the 28 offenders has been arrested so far.

Weeks of protests led by Khan and Qadri seeking the resignation of Prime Minister Nawaz Sharif descended into several days of violence at the end of August. Demonstrators clashed with police, attempted to storm Parliament and briefly took over state broadcaster Pakistan Television, taking its news channel off air for a while. A police spokesman said no arrests had been made so far, but cases had been registered under antiterrorism laws for attacking PTV, Parliament and other official buildings, and clashing with police.

Qadri called off his protest last month and has left for Canada, where he is normally based, but Khan continues to address supporters from the top of a shipping container outside Parliament most evenings. The protests destabilized Sharif’s government for a while but have, so far, failed in their stated aim of bringing down his administration. Khan has announced a fresh protest rally in Islamabad on Nov. 30.

Shireen Mazari, spokeswoman for Khan’s PTI, dismissed the warrants as an act of desperation by the government. “The government has totally lost it and they are merely hastening their own downfall. Arrest warrants will not stop Imran Khan and Pakistan Tehreek-e-Insaf,” she said.

On the day PTV was stormed, Sept. 1, more than 300 protesters, many armed with wooden clubs, entered the building shouting antigovernment slogans. Television footage showed some of them beating a photo of Sharif with sticks and spitting on it. Several people at the scene were wearing PTI scarves and t-shirts, and Khan had apologized for the break-in, saying his party workers had “become emotional.”