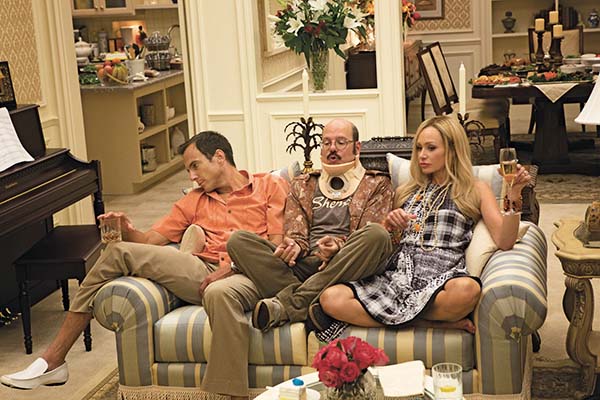 The new season of never nudes feels like an also-ran.

Reactions to Season 4 of Arrested Development—all 15 of its episodes, which were released May 26 on Netflix—have been mixed. The original show, which ran between 2003 and 2006 on Fox and revolved around the travails of a wealthy and dysfunctional Orange County real-estate clan enmeshed in legal troubles, became virtually synonymous with smart, sophisticated humor in the early ’00s. Its topsy-turvy world of never nudes, Blue Men, racist puppets, and hook-handed motherboys was never a ratings draw, but it attracted a devoted cult of viewers.

Creator Mitch Hurwitz and Netflix teamed up to resurrect the show seven years after it went off the air, catching up with Michael (Jason Bateman), Lucille (Jessica Walter), Gob (Will Arnett), et al. after the housing-market crash. But for many this revival series is a shadow of its former self.

When Arrested aired, it had to be wedged into a 21-minute time slot to accommodate ad breaks, forcing Hurwitz and his writing staff to make judicious cuts. As a result, those episodes were muscular, taut, and perfectly paced. On Netflix, however, there are no such limitations, and the new episodes, which feel bloated and plodding, often clock in at 35 minutes. In fact, the Netflix format is so free that episode run times vary greatly.

Season 4, which is composed of single-character installments and whose plot unfolds in a nonlinear fashion, feels grotesquely misshapen, as though the lack of rules meant that Hurwitz could stuff in everything he wanted. What was once subversive and clever instead feels tired, overwrought, and indulgent. So much so that some fans are wishing they could pop one of Gob’s infamous Forget-Me-Nows in order to erase the memory of this potentially legacy-tarnishing also-ran.