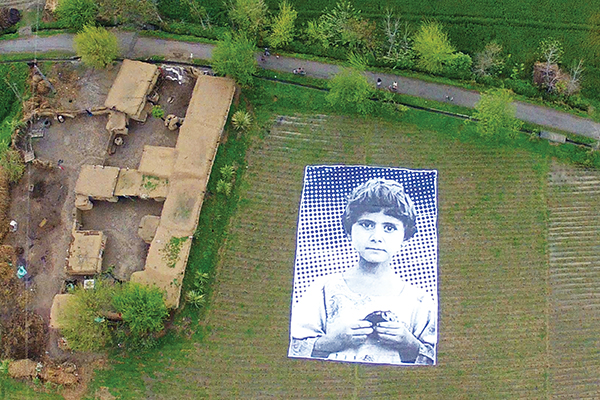 A collective of Pakistanis in collaboration with the French artist known as JR, Reprieve, and the Foundation for Fundamental Rights has an art installation up somewhere in Khyber-Pakhtunkhwa province—“where drone attacks regularly occur,” it says—to appeal to the humanity in U.S. drone operators. “Drone operators often refer to kills as ‘bug splats,’” says their press release. The project aims “to challenge this insensitivity as well as raise awareness of civilian casualties.” It continues: “Now, when viewed by a drone camera, what an operator sees on his screen is not an anonymous dot on the landscape, but a child’s face. The poster is also designed to be captured by satellites in order to make it a permanent part of the landscape on online mapping sites.” The collective says similar installations are being put up in the federally-administered tribal areas, where drone strikes have regularly occurred. The #NotaBugSplat campaign has made global news, and the people of northwest Pakistan see some utility in it. They want more installations up so they can use the giant plastic sheets to waterproof their homes.

Editor’s Note: The print version, and earlier electronic version, of this piece erroneously states that no drone strike has occurred in Khyber-Pakhtunkhwa proper. On Nov. 21, 2013, a drone hit a target in Tal, Hangu, abutting the federally-administered tribal areas. We regret the error.

“The noble intent could have benefited from hard facts. For one, there has never been a drone strike in Khyber-Pakhtunkhwa.”
Really, Newsweek, you say hard facts?