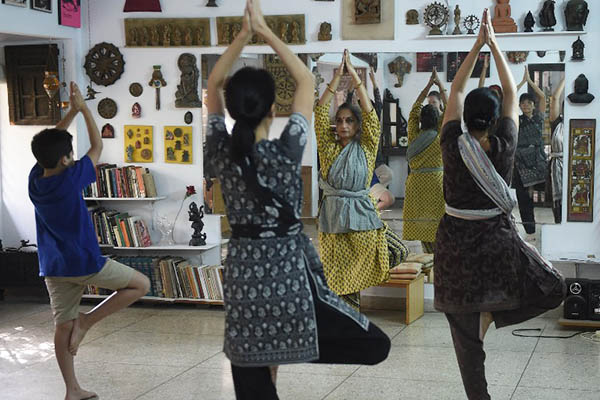 With her arms stretched out and her hands elegantly curved, the young dancer stamps her feet with aplomb, defying prejudice, as her art is reviled by many in religiously conservative Pakistan, where it is often linked with prostitution.

“We constantly have to explain to people that dance is an art form, it’s not just about what happens in the red light areas, not just about entertaining men and sexuality,” says Suhaee Abro.

Graceful and poised in her richly colored sari, she practices the odissi form of dance, in which movements of the face and hands are perfectly timed.

Dance is deeply embedded in Pakistani culture, in marriages, folk festivals and films—the complex choreography similar to that found in Bollywood. But it is also deeply frowned upon in the Muslim-majority country for women to be seen dancing outside of a family setting, and worse still to perform for money.

“Unfortunately it is associated with the ‘dancing girls of Lahore’,” says Rahat Kazmi from the National Academy for Performing Arts—a reference to prostitutes swaying awkwardly in the red light district of Pakistan’s cultural capital.

Historically, classical dance in the subcontinent was the domain of tawaifs, courtesans of the Mughal Empire, which ruled India for hundreds of years until the advent of British rule in the 19th century. Like the geishas of Japan, they were known as connoisseurs of the fine arts before their status deteriorated, especially under British rule, to mere prostitutes.

Today, prostitutes sometimes use dancing as a cover to carry out their illegal trade. It is therefore necessary “to create this bifurcation and say that no, this is art also,” according to Kazmi.

“I am a practicing Muslim and a dancer, and I don’t see why this should clash. My heart does not feel anything wrong,” says anthropologist and professional dancer Feriyal Aslam, who practices Bharatanatyam, a form from southern India. “But my mum herself feels it is wrong, She thinks ‘what will I say to God one day, that I did not tell my daughter to do the right thing’,” explains the 40-year-old, who has also written a thesis on the subject.

Dance was banned in 1981 as part of an Islamization drive led by military ruler Zia-ul-Haq. His directive specifically targeted dancers wearing ankle bells, an essential accessory of the main classical forms, which the regime associated with obscenity and nudity. The directive exists to this day but its application has eased, though new threats have emerged.

“Now the bureaucratic hassle is not so strong, but the Taliban mindset had gotten into the mind of the people,” says dancer Sheema Kirmani. Anyone in the audience “who feels that he might get to heaven by killing you can just walk up to the stage and do so,” she says.

What’s more, dance enjoys no institutional support, with dancers often forced by economy to work second jobs, and both the private and public sectors reluctant to be associated with the disreputable art.

That reluctance is amplified by Pakistani classical dance’s shared lineage with India. Pakistan has been desperate to distinguish itself from its neighbor and rival since the partition of the subcontinent in 1947.

But odissi and bharatanatyam are historically linked to Hinduism, and many Pakistani dancers complete their training in India due to the lack of facilities back home. “[By] creating an identity which had nothing to do with our Indian past, we gave up on dance, music, theater,” says Kirmani, known as a “guru” in her own right. “But what identity can Pakistan create in just a few years, if it denigrates all common past?” she added.

“There is no Hindu or Muslim dance, dance is dance,” adds Suhaee Abro, a former student of Kirmani.

One form that has gained a sort of official recognition is kathak, with its dazzling and noisy footwork akin to flamenco, and dancers whirling like dervishes. This indulgence derives from the fact that it was practiced in the Muslim court of the Mughals.

To rehabilitate dance’s image, “people need to be exposed to good proper classical dance,” says Adnan Jihangir, a rare example of a male kathak dancer, whose own parents took seven years to accept his passion and see him perform. “I do all I can to create an audience for dance—by offering something different from the vulgar movements they see on television,” he says, lamenting the ubiquity of suggestive dance moves that have been popularized by Bollywood.

Feriyal Aslam remains optimistic for the new generation, pointing out that these challenges are also an opportunity for innovation as dancers adapt traditional forms to the modern, local context. “It is unique and exciting as a dance scholar to see what Pakistani classical dancers are able to do,” she says.