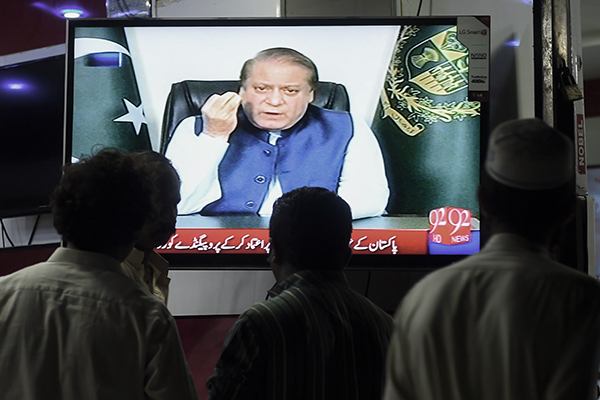 The Panama problem isn’t going away.

Prime Minister Nawaz Sharif addressed the nation on Friday evening. This was his second address after the deluge of the Panama Papers, which show his children using tax havens for their offshore assets. Sharif said he had asked the chief justice to head a commission to probe the allegations being leveled against his family and the 200-plus other Pakistanis who feature in the leaks. He vowed that if found guilty he would “go home.”

Sharif had earlier announced a similar commission presided by a retired judge, but this was rejected by all opposition parties and the media with its inexpert diatribes. Clearly seething at the “media trial” of his children, Sharif also implored the press to be more circumspect and he derisively brought in several rivals, including former president and Army chief Pervez Musharraf and Pakistan Tehreek-e-Insaf chief Imran Khan, into the mix.

The opposition had been demanding a commission led by the chief justice. Sharif has given them that. But the government-framed terms of reference for this commission are seen by the opposition and media as being too broad and so the prime minister’s letter to the chief justice also stands rejected. Chief Justice Anwar Zaheer Jamali, much exercised by corruption and the malfunction of government, saw where the Panama Papers scandal was heading and made it clear that he would be unwilling to take up any investigation because that “is the task of the government, not the judiciary.”

As the storm was brewing, Army sources made public the dismissal of a group of senior military officers for corruption and called for an across-the-board sweep against graft in the country if terrorism was to be tackled effectively. This was widely interpreted as a “Get Nawaz” signal, and the media anchors once again sharpened their knives, aided by aroused politicians scenting another toppling in the air. Khan led the frontal assault, accusing Sharif of getting personally close to his Indian counterpart Narendra Modi and badmouthing his own Army to him. Khan was in his usual haste because of the growing turmoil inside his party unfortunately highlighted by the defection of his party’s member of the Sindh Assembly to an MQM splinter group.

It is anybody’s guess if Jamali will accept his assignment. He knows what happens to commissions when they are not accepted by the opposition parties. A day before he was to go to Turkey, Jamali addressed lawyers in Lahore and complained that litigation of planned delay to earn illicit money should be avoided as that undermined justice. He has already complained about the continuance of incompetence and corruption in the lower judiciary. Whatever happens in the coming days, the chaos—manufactured by politicians whose parties are falling apart—will continue to thicken until it brings already flawed governance to a standstill.