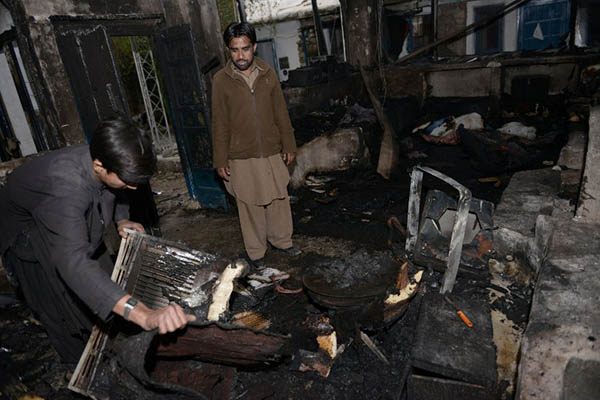 Police investigating if yoga center was targeted due to links to India and founder Sri Sri Ravi Shankar.

Armed men have burnt down a yoga center in Islamabad inaugurated by a globally renowned Indian Hindu guru who once offered to teach inner peace to the Taliban, police said Sunday.

The Art of Living center was torched on Saturday night in the upmarket Bani Gala suburb of the capital. It was the Pakistan branch of an international non-government organization founded by Nobel peace prize nominee Sri Sri Ravi Shankar, described by Forbes magazine in 2009 as the fifth most powerful person in India.

Nayyer Salim, a police official, said some eight to nine people were involved in the attack. “The watchman told us that some eight to nine men armed with pistols and guns came and asked for money. Then they tied up three employees on duty and spread petrol,” he said. The staff members survived the attack, police said.

Shahnaz Minallah, the Pakistan co-chair of Art of Living who was in Lahore at the time of the arson confirmed the incident but declined to comment further until she reached the site.

Police said the motive behind the incident was not yet clear but they were investigating whether it was related to the center’s connection with India.

Shankar last visited Pakistan in 2012, saying in an interview: “I would love to stretch my hands to Talibans because I would like them to see from a broader perspective of the universe.”

His centers, which have branches all over the world and count some 300 million followers, teach breathing practices designed to relieve stress and jealousies. Its adherents in Pakistan were mainly drawn from the country’s urbane, educated elite.

But the branch, built in 2004, has attracted some criticism by some in the media who see yoga as un-Islamic. Pakistani TV host Arshad Sharif hosted a show in February where he asked panelists whether the center was “compromising national security” and “challenging our values and lifestyle.”

this incident has to be condemned

Shame on you Arshad Sharif, you are responsible for this as much as the ignorant gunmen who torched the site.

intolerance is growing in pakistan. I pity the sane voices, who are still able to speak up against this madness.

Since when is improving one’s health a threat to Pakistani values? Lifestyle, yes I understand. This nation does not exercise but value??? Really?? So what is really being promoted here? Intolerance? This guy does not represent Pakistani values and should be banned from the airways!

We condemn all forms of violence. However, Sudarshan Kriya is not healthy. It’s an anti-depressant. All members of the Art of Living Foundation are made to get addicted to this anti-depressant called Sudarshan Kriya without any proper diagnosis. Sri Sri Ravi Shankar has no qualification in mental health, physical health or even Ayurveda. He is practicing medicine and Psychiatry without a licence. This is harmful for every person. Read the Art of Living’s own research paper titled “Depression Summary” on Art of Living’s research site. Sudarshan Kriya has been used to treat people who have Dysthymia. Many people have discovered that Sri Sri Ravi Shankar is harming people because he is illegally treating everyone for Dysthymia. But we express ourselves only through non-violent means. We have blogs and a channel on you tube on which we upload videos. Go by evidence. If you do so, you will realize that Sri Sri Ravi Shankar brainwashes people. And, most of the money that he makes is spent on his stays in seven star hotels in exotic locations all over the world and on flying by first class (among other expensive habits). Sometimes he travels to upto 12 countries in a month. Whoever discovered that he indulges in fraudulent practices should not have resorted to violence. We condemn all forms of violence.

Addictive??? No way bro.. I have tried and left many a times. It could not make me addictive. So in my view, you are misguiding people by saying it’s addictive. It’s completely true, when I do Sudarshana kriya, I feel great. I leave this to the practitioners how they feel it. @invisible Indian one thing I want to say about you THAT YOU ARE DOING GREAT DISSERVICE TO THE PEOPLE BY TACTFULLY MISGUIDING THE PEOPLE. If we are not doing anything good to others, at least we should not become hurdles in someone’s nice intention of doing something for the welfare of others.

To the “invisible indian”, your comments are incorrect and you are mis-informed. Sudarshan Kriya is not in any way addictive as you claim. It is a simple breathing technique that anyone can practice in about 10 minutes to cleanse and nourish the entire nervous system. Afterwards, you feel refreshed and alert and re-energized.

As you mentioned, there are many research studies that are being conducted by various health professionals and medical research institutions on the benefits of this breathing technique. So far, the results have all been positive, with many traditional doctors recommending it as an additional therapy for their patients who are suffering from various chronic conditions, like depression, which to not respond to traditional therapies.