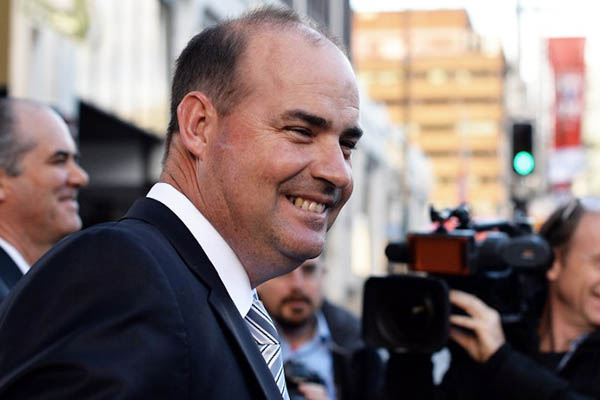 Pakistan coach Mickey Arthur said he hoped a proposed World XI visit to the country later this year went ahead after his side served notice of their enduring talent with a stunning Champions Trophy final win over India.

Bottom-ranked Pakistan produced a breathtaking display at London’s Oval on Sunday to inflict a 180-run defeat upon rivals India, the title-holders, in the climax of a tournament featuring the world’s top eight one-day international nations.

Pakistan made 338 for four, with Fakhar Zaman’s 114—the left-handed opener’s maiden ODI hundred—the cornerstone. Mohammad Amir then reduced India to 33 for three by dismissing all the members of their much vaunted top three, with Rohit Sharma out for a duck and opposing skipper Virat Kohli, the world’s leading ODI batsman, falling for just five.

India eventually collapsed to 158 all out as they suffered their heaviest defeat, by runs, in 129 ODIs against Pakistan.

With the exception of Zimbabwe’s tour two years ago, Pakistan have had to play all of their ‘home’ matches outside of the country since a 2009 terror attack on Sri Lanka’s team bus in Lahore.

However, the International Cricket Council is set to send a World XI to Pakistan in September. That team could find themselves acting as a ‘path-finder’ for the resumption of tours of Pakistan by major cricket nations.

Giles Clarke, the president of the England and Wales Cricket Board and head of the ICC’s Pakistan task force said, in comments reported by The Guardian in March: “The desire is to give the cricket-starved Pakistani supporters the chance to see some of the world’s finest players in live action. Furthermore, the terrorists cannot win and cricket must not give up on Pakistan.”

Arthur for one was looking forward to the series. “We’re scheduled to have a World XI in Pakistan in September for three Twenty20 games,” he said. “So hopefully that starts paving the way for future tours. We can only hope.”

Pakistan’s victory on Sunday was all the more astounding given a 124-run defeat by India in their tournament opener at Edgbaston on June 4. The turnaround was a triumph for Pakistan captain Sarfraz Ahmed, who impressed in his triple role of wicketkeeper, batsman and skipper.

“I hope this win will boost Pakistan cricket and all the [major] playing nations will come to Pakistan,” said Ahmed, who will now look to lead Pakistan at the 2019 World Cup in England as well. He added: “Hopefully this win, everyone will remember, not just for today, not just for tomorrow, but for a very long, long time. When we arrived here [in England], we were No. 8 and now we are the champions.”

Meanwhile, Arthur paid tribute to Ahmed’s role as both a tactician and a leader following what was by, the coach’s own admission, a “shambolic” first-up loss to India. “We just had to keep believing … they kept on believing, trusting their roles [and] trusting the game-plan that ‘Saffy’ [Sarfraz] and I had set up,” said Arthur for whom this was a first major tournament success after spells in charge of both his native South Africa and Australia.

Amir, whose career was nearly ended by a ban and jail sentence for his involvement in a spot-fixing scan during a 2010 Test at Lord’s, was in superb form after a back spasm forced him out of the semi-final win over England. “It says a lot about his personality … but what I do know is that Mohammad Amir is a big-match player,” said Arthur.

Kohli, himself renowned for rising to the big occasion, admitted India had been outplayed. “They made us make those mistakes with the way they were bowling, creating that pressure,” he said. “In the end … you have to accept and admire sometimes the skill of the opposition.”