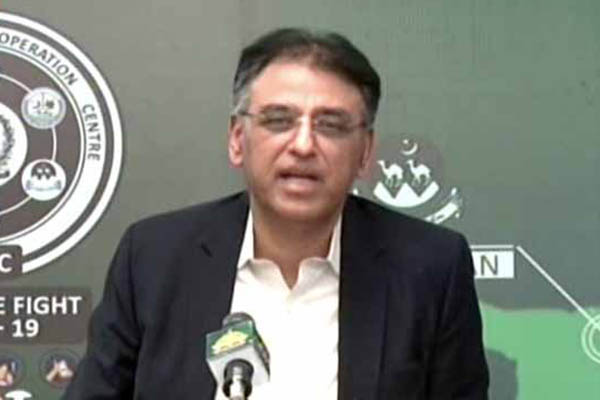 Planning minister warns businesses of closures if they don’t adhere to government guidelines to verify vaccination status of customers, employees

Planning Minister Asad Umar on Friday warned that there are “clear early signs” of a fourth wave of the coronavirus pandemic spreading in Pakistan, and blamed poor SOP compliance as the main cause of the resurgence.

“Two weeks back, I had tweeted that our artificial intelligence models are showing possible emergence of 4th wave,” he posted on Twitter. “Now there are clear early signs of 4th wave starting. Poor SOP compliance, coupled with spread of variants of concerns, Indian [Delta] variant in particular, are the main cause,” he added.

The minister, who also heads the National Command and Operation Center (NCOC) overseeing the national response to the pandemic, warned businesses that were not verifying vaccination status of customers and employees that they could face closures if they did not adhere to government guidelines.

“Field reports are showing complete disregard of the condition of vaccination for those attending indoor weddings and going to indoor restaurants and gyms,” he said. “If the owners of these facilities do not show responsibility and ensure compliance, there will be no choice but to shut them down,” he added.

The latest warning from Umar comes just a day after he had rejected the possibility of a nationwide lockdown—but had admitted that targeted lockdowns could be re-imposed to curb the spread of the fourth wave. Addressing the oath taking ceremony of the newly appointed members of the National Youth Council, he said “smart lockdowns” would be imposed in areas that see a surge in confirmed infections of COVID-19, adding that this strategy had proven successful in curbing the pandemic in the past.

During his speech, he had urged the public to continue adhering to coronavirus SOPs and get themselves vaccinated as soon as possible to aid Pakistan in overcoming a potential fourth wave of the pandemic.

Also on Thursday, Prime Minister Imran Khan urged citizens to strictly observe government guidelines ahead of, and during, the upcoming Eidul Azha festival to prevent the coronavirus from spreading.

In a nationally televised address, he warned about the dangers of the Delta variant that first originated in India, stressing that regional neighbors such as India, Bangladesh, Afghanistan, and Indonesia were already being forced to re-impose lockdowns due to its spread.

“Given the current situation in countries like Afghanistan, where there is an acute shortage of oxygen, I would like to say a few things to the nation,” he said. Thanking Allah for being merciful toward Pakistan thus far, he praised government bodies such as the NCOC for taking timely measures to contain the viral spread.

The prime minister also thanked the public for cooperating with authorities. “I know that people are fed up of following the SOPs across the world and I understand that. [However] I would again like to appeal to the masses to wear a mask at all times so that the country could be saved from the possible fourth wave of the pandemic,” he said, adding that this simple step could help save the country from economic disaster.

Khan also urged the public to get vaccinated as soon as possible. Acknowledging that Pakistan faced supply issues, he regretted that the vaccination drive had not been as speedy as it could have been, but stressed that people should take advantage of any available vaccines to reduce the spread of COVID-19.