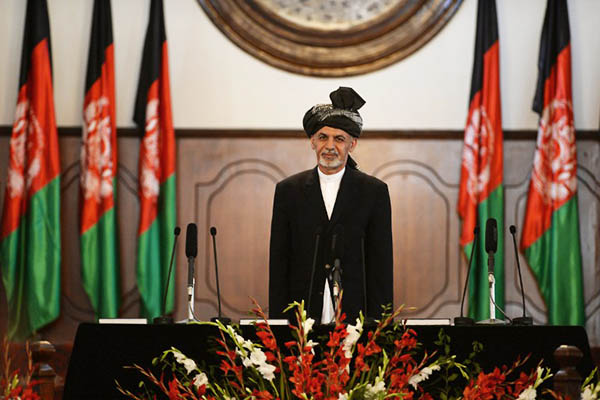 Ashraf Ghani, a one-time U.S.-based academic, was sworn in as new president of Afghanistan on Monday and used his inaugural speech to call for Taliban insurgents to join peace talks after 13 years of war.

Officials said Ghani’s first major policy move would be the signing of a long-delayed agreement allowing 12,500 U.S.-led troops to remain in Afghanistan into 2015 to support and train the national police and army. The militant threat in Kabul was underlined by a suicide attack outside the airport’s main entrance that killed four members of the Afghan security forces and three civilians shortly before the inauguration.

The ceremony at the presidential palace marked the country’s first democratic transfer of power and opened a new era after the rule of Hamid Karzai, president since the Taliban regime was ousted in 2001. The June presidential election was engulfed in disputes over fraud, but international donors welcomed Monday’s inauguration as a key legacy of the costly military and civilian intervention in Afghanistan.

“We ask opponents of the government, especially the Taliban and Hezb-e-Islami [militant group], to enter political talks,” Ghani said after being sworn in. “Any problems that they have, they should tell us, we will find a solution. We ask every villager to call for peace. We ask Muslim scholars to advise the Taliban, and if they don’t listen to their advice, they should cut off relations.”

Karzai also pursued peace talks with the insurgents, but preliminary efforts collapsed last year. Three months before the end of NATO’s U.S.-led combat mission, the Taliban still pose a serious challenge to national stability and have launched several fresh offensives in recent months. Karzai refused to sign the security deal with Washington in a disagreement that symbolized the decline of Afghan-U.S. ties after the heady optimism of 2001.

Ghani is likely to reset relations with the U.S. at a difficult time for Afghanistan as most NATO troops leave and international aid is pared back.

Both Ghani and his poll rival Abdullah Abdullah claimed to have won the election, plunging Afghanistan into months of crisis that fuelled the insurgency and worsened the country’s dire economic outlook. Under pressure from the U.S. and U.N., the two candidates eventually agreed to form a “national unity government,” and Ghani was declared president a week ago after an audit of nearly eight million ballot papers.

Abdullah was also sworn in on Monday as “chief executive,” a new role similar to a prime minister, as part of a power-sharing deal that is likely to cause friction between opposing camps within the government.

Abdullah struck a positive tone at the ceremony, saying “in this critical period of history, as a team, we are committed to a national unity government based on the political deal.”

Afghan dignitaries gathered at the palace from early morning with helicopters buzzing overhead ferrying a guest-list of low-level foreign representatives. John Podesta, counselor to President Barack Obama, led the U.S. delegation, with President Mamnoon Hussain representing Pakistan. Many other countries, including Britain and France, were represented only by their diplomats in Kabul.

“I’m sure the new leadership has received the people’s message and will make peace and stability their priority,” Karzai said at the ceremony in his final appearance as president. “There is no progress without peace. If there was peace in our country, and if there were no obstacles to it, our country would have advanced more.”

Karzai achieved patchy success in improving education, access to health and women’s rights but was often accused of failing to tackle rampant corruption and Taliban violence.

Both Ghani and Abdullah are moderate, pro-Western leaders who have vowed to push ahead with reforms, with stabilizing the floundering economy high on the agenda. A Ghani aide said that the security deal would be signed on Tuesday between a senior Afghan minister and U.S. and NATO officials.

Only 33 NATO bases are still active, down from a peak of 800—leaving local security forces to battle the Taliban with less and less help.

Final results revealed Ghani beat Abdullah 55 to 45 percent in the run-off vote, though the U.N. said the election had been affected by “significant fraud.”

“Both President Ghani and Dr. Abdullah carry the nation’s expectations,” said U.N. mission chief Jan Kubis as he congratulated Afghanistan on the handover.

Karzai was constitutionally barred from running for a third term in office. In his speech Ghani also paid tribute to his wife Rula, an unusual move in Afghanistan’s patriarchal culture.