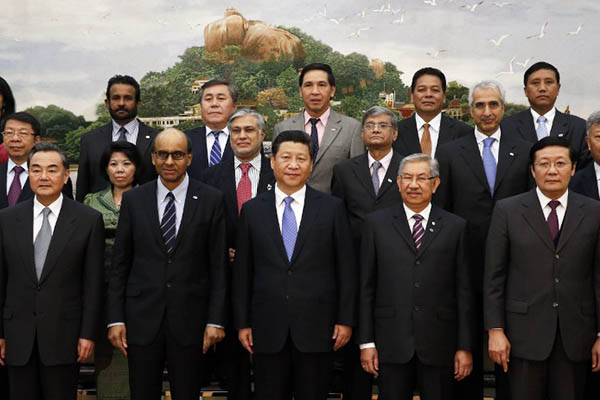 China and 20 other countries moved forward on Friday toward setting up an Asian infrastructure lender seen as a counterweight to Western-backed international development banks.

The signatories put their names to a memorandum of understanding to establish the Asian Infrastructure Investment Bank (AIIB) at a ceremony in the Great Hall of the People in Beijing. The institution, whose development has been driven by China, will be based in Beijing according to the official news agency Xinhua, and is expected to have initial capital of $50 billion. It is intended to address the region’s burgeoning demand for transportation, dams, ports and other facilities, officials say.

“In China we have a folk saying,” Chinese President Xi Jinping told delegates after the signing ceremony. “If you would like to get rich, build roads first, and I believe that is a very vivid description of the importance of infrastructure to economic development.”

China’s rise to become the world’s second-largest economy has been accompanied by a desire to play a greater role in international organizations, such as the International Monetary Fund, the World Bank and the ADB, which have been dominated by Europe, the United States and Japan. But other than China, among Asia’s 10 largest economies only India and Singapore signed the AIIB memorandum, with three of the top five—Japan, South Korea and Indonesia—notably absent. The countries participating in the AIIB are Singapore, India, China, Vietnam, the Philippines, Mongolia, Laos, Cambodia, Oman, Uzbekistan, Thailand, Sri Lanka, Qatar, Pakistan, Nepal, Bangladesh, Brunei, Kazakhstan, Kuwait, Malaysia and Myanmar.

The Japanese head of the Asian Development Bank, another regional lender, said after the signing ceremony that questions remained over the AIIB’s structure and that it needed to adhere to international standards. “It is vitally important that AIIB adopt international best practices in procurement and environmental and social safeguard standards on its projects and programs,” ADB President Takehiko Nakao said in a statement.

The Japanese government has also expressed concern, while the United States is reportedly fiercely opposed to the AIIB.

China maintained it is open to more countries joining, and said it was still in talks with the U.S. and Japan on the issue. “We have maintained communication with the U.S., Japan, Indonesia and other countries,” Chinese foreign ministry spokeswoman Hua Chunying said at a regular briefing. “We welcome the participation of other countries in the process, and we will stay in contact with all relevant parties.”

Xi moved to reassure after the signing. “For the AIIB, its operation needs to follow multilateral rules and procedures,” he said. “We have also to learn from the World Bank and the Asia Development Bank and other existing multilateral development institutions in their good practices.”

The MoU signatories will negotiate the bank’s specifics in the coming months and expect to finish by the end of next year, according to a statement from Singapore’s finance ministry.

World Bank President Jim Yong Kim said in July that estimates for infrastructure needs in developing countries are at least $1 trillion annually, far beyond the current capacity of his institution and private investment to handle. “We think that the need for new investments in infrastructure is massive and we think that we can work very well and cooperatively with any of these new banks once they become a reality,” Kim told reporters in Beijing.