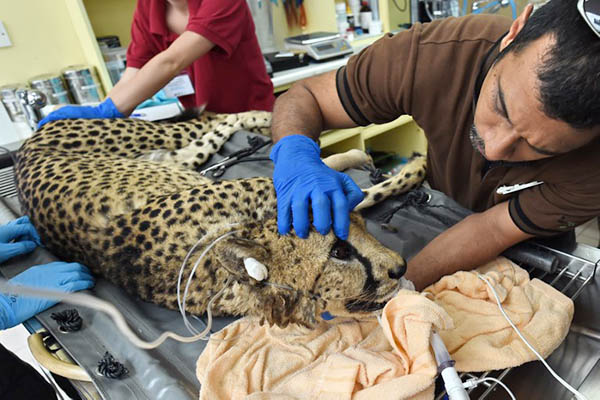 Kima the cheetah lies unconscious on an operating table while blood samples are taken and a monitor beeps in the background, being treated not for the results of a savage attack, but for the ravages of old age. As with humans, animal populations in developed countries are living longer, putting a strain on healthcare resources, with experts warning animal enclosures in Asia are ill-equipped to handle the burden.

“Few zoos are adequately prepared for this,” said Dave Neale, Welfare Director of Animals Asia, adding that the region was well behind the West in addressing the problem. “If an animal does survive to an old age it is likely to suffer within an unsuitable environment due to the lack of such available skills and knowledge,” he explained.

Singapore Zoo is one of the few in Asia to tackle the issue: It has introduced a senior animals’ program, where the elderly get a specialized diet, regular visits from an in-house vet and individually tailored exercise regimes. The scheme began this year and about 100 animals have been signed up. Participants are required to have reached about 80 percent of their natural lifespan before they are deemed eligible.

At 18, Kima is well into her twilight years. Cheetahs in captivity usually live to age 10-15, and around six in the wild, according to the Big Cat Rescue charity. Keepers had reported the creature had problems catching treats thrown to her and an examination confirmed she needed surgery for cataracts.

“In the zoo, there are no predators and there’s always food to eat, so they tend to live longer than in the wild,” said Luis Carlos, who works for zoo operator Wildlife Reserves Singapore. “But this also means that they develop health problems you normally wouldn’t see in animals outside,” he added.

Among the elderly patients is polar bear Inuka who, at 26, is a senior citizen by arctic standards, and suffers from arthritis and impaired hearing. His days start with an examination by his keeper and a vet, who check on his gait, teeth and response to commands.

Earlier this year, specialists were drafted in to perform cataract surgery on Jojo, a 60-year-old orangutan, who was already blind in one eye and hearing impaired. But tough choices need to be made when it comes to caring for elderly animals, zookeeper Mohan Ponichamy insisted.

The team recently had to put down a white tiger who was suffering from skin cancer and joint degeneration. “As a person you feel sad but we have to make the best decision for the animal,” Ponichamy added.

Set in a lush nature reserve, Singapore Zoo is home to thousands of animals, from orangutans to flying foxes, and is regarded as one of the region’s better-run wildlife parks.

The city state is viewed as a leader in caring for elderly animals in Asia though such schemes are common in the West, according to Louis Ng, founder of ACRES, a local animal welfare advocacy group. In the U.S., institutions from the Smithsonian’s National Zoo in Washington, where keepers communicate with a blind seal through sound and touch, to the Shedd Aquarium in Chicago where a caiman was fitted with a prosthetic limb after a tumor was found on its leg, have invested in ageing animal care.

Ng warned: “Asian zoos still have a lot of catching up to do, be it in terms of the set-up, the veterinary expertise [and] the nutritional team.”