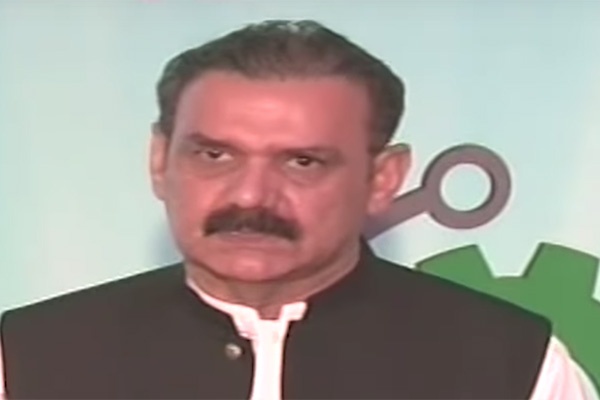 Lt. Gen. (retd) Asim Saleem Bajwa on Thursday announced that he was stepping down as special assistant to the P.M. on information and hoped P.M. Imran Khan would accept his resignation.

In a string of media appearances to defend himself against allegations of assets beyond means and to rebut the impression that he had lied on his assets declaration, Bajwa said that he had decided to focus all his energies on the China-Pakistan Economic Corridor (CPEC)—he will continue working as CPEC Authority chairman—and will be stopping down from his cabinet post.

The post of CPEC Authority chairman does not require the official to reveal any of his assets unlike the SAPM position.

Prior to his media appearances on Thursday night, Bajwa posted a rebuttal on Twitter in which he stressed that his sons and brothers were independent of him and had their own assets. Similarly, he maintained his wife had divested herself of her shares in companies operated by the Bajwa family on June 1, 2020—three weeks before he declared his assets as SAPM.

The CPEC Authority chairman said he had documented proof to provide a money trail. However, he said he would only provide this if a judicial forum or similar investigative body required it.

Bajwa’s clarification on his family’s assets was prompted by a news report penned by journalist Ahmed Noorani in which he alleged that Bajwa had used his various roles to set up offshore businesses for his wife, sons and brothers. The report claimed Bajwa’s younger brothers had opened their first Papa John’s pizza franchise in 2002, the year he joined Gen. Pervez Musharraf’s staff.

The report claimed Nadeem Bajwa, 53, had started as a delivery driver for the restaurant franchise, and had since—alongwith his brothers and Asim Bajwa’s wife and sons—developed a business empire comprising 99 companies in four countries, including a pizza franchise with 133 restaurants worth an estimated $39.9 million. Of the 99 firms listed by the report, 66 are main companies, 33 are branch companies, and five are now dormant.

According to Noorani’s report, the Bajwa family’s companies spent an estimated $52.2 million to develop their businesses, and $14.5 million to purchase properties in the United States.

The report, which was published on a website, also alleged that Bajwa’s wife was a shareholder in all the foreign businesses, with official records showing that the companies also have investments in real estate. Despite this, Bajwa—in his statements of assets and liabilities—had declared an investment of just $18,468 in his wife’s name, and maintained he has no “immovable property” outside Pakistan.

In his statement, Bajwa rejected Ahmed Noorani’s report, claiming it was “false.” He claimed the report had been filed to “tarnish my image.”

Bajwa said that unlike the report’s claims, his wife had divested herself of her shareholdings a few weeks prior to his declaring his assets. “My wife had disinvested all her interests as at 01.06.2020 in any entity abroad and such fact has been duly documented in the official records in the USA. It may be pointed out that company registered in the SECP in Pakistan was liaison office of the companies in the USA. The process of change of name in the SECP in Pakistan has been conducted in due course, but that was only a ministerial function since the interest in the parent companies in the USA stood no more in the name of my wife as on 22.06.2020 i.e. the date of filing of my declaration of assets and liabilities as an SAPM,” he said.

He said that from 2002 till August this year—a period of 18 years—his wife had invested $19,492 in the companies of his brothers. “This investment was made by my wife through my savings spread over a period of 18 years, all of which are fully accounted for. Not once the rules or regulations prescribed by the SBP [State Bank of Pakistan] were violated,” he claimed.

“In a span of 18 years i.e. from 2002 till date my brothers purchased the franchise and assets related thereto and real estate to the tune of $70 million, out of which around $60 million was through bank loans and financial facilities,” he said. “Over a period of 18 years the actual out of pocket cash investment into the said businesses by my brothers and wife has been about $73,950. It is further pointed out that out of $73,950, my wife’s contribution, as stated aforesaid, is $19,492. Thus, the total out of pocket cash contribution of my five brothers, over a period of 18 years, has been $54,458,” he added.

The CPEC Authority chairman also defended his children’s assets, claiming most of the companies listed under their names had “never done any business” and were lying dormant since inception. Among these are Scion Builders, Krypton and Advance Marketing (Pvt.) Ltd.