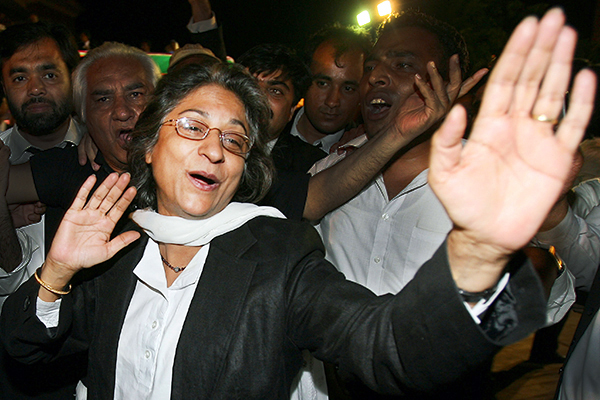 The rights activist is bigger than her latest win.

[dropcap]T[/dropcap]here are many reasons to celebrate Asma Jahangir‚ but her election as the first woman president of the Supreme Court Bar Association of Pakistan is not one of them. Here’s some perspective: it takes fewer votes to become an official of the SCBAP than‚ say‚ of the Lahore Gymkhana. Jahangir only edged out closest rival‚ Ahmed Awais‚ by 2.2 percent of the eight-city vote on Oct. 27.

In the popular imagination‚ the position of SCBAP president became one of consequence only when Aitzaz Ahsan—a former law minister and the intellectual architect of the lawyers’ movement‚ which began with the original ouster of Pakistan’s Chief Justice Iftikhar Chaudhry in March 2007—won the one-year office in 2008. Like Ahsan‚ Jahangir does not need the pulpit of the bar association to be heard. And like him, she will bring to the office the thoughtfulness‚ clarity of purpose, and dignity that her immediate predecessor‚ Qazi Muhammad Anwar‚ worked so hard to destroy.

Analysis of Jahangir’s win has been informed by the narrative of the battle of wills between the Pakistan Peoples Party-led government and the Supreme Court. Those who dislike Jahangir have dismissed her as the ruling party’s candidate in sheep’s clothing. This is nonsense. Her latest success‚ viewed in terms of who supported her and how‚ leads to one inescapable conclusion: Pakistanis lack moral courage.

When haters were accusing Jahangir‚ 58‚ of being President Asif Ali Zardari’s Girl Friday‚ an Indian agent‚ and a godless progressive‚ Pakistani liberals in the media‚ the legal establishment‚ business world‚ and on the blogs said and did nothing. As ever‚ Jahangir was left to fend for herself. When she won‚ no thanks to them‚ it was finally safe for the enfeebled and effete to come out and celebrate as if they had always been secretly rooting for her. The liberals who are now congratulating each other in the opinion pages of the dailies should have spoken out‚ loudly‚ when she was being smeared and sullied so brutally. They should have made noise not out of any compulsions of chivalry‚ but because she has always spoken out for Pakistanis who have been victimized. And she has done so consistently and with complete disregard for her own personal safety.

The lawyers’ community is now a powerful pressure group. Having tasted blood when it fatally weakened former president and strongman Pervez Musharraf‚ it is now a union that yields readily to lawlessness‚ partisanship‚ and closed-mindedness.

All kinds of Pakistanis took to the streets to support the court-decreed ban on Facebook in May. But when it came to protesting against the brutal twin attacks on two Ahmadi mosques in Lahore the same month‚ there was largely silence—but not from Jahangir or the Human Rights Commission of Pakistan‚ the nongovernmental organization she led. There are many Pakistanis who believe Ahmadis deserve this apathy‚ if not worse‚ because their beliefs leave them unworthy of little else. The few elected officials who belatedly condoled with victims of those attacks at hospital did so with uncustomary modesty‚ no camera crews to chronicle their compassion.

Jahangir’s election victory also does not prove that Pakistan’s top lawyers have a liberal worldview. If the lawyers who comprise the SCBAP were as progressive as they are now being made out to be‚ it would not have been such a down-to-the-wire race. The main page of the bar association’s official website still hosts a pre-polls graphic with the words‚ “Thank you. Change can happen—SCBAP Election 2010‚” and two suited men with question marks for faces—one waving to an unseen audience; the other pointing the way forward. Jahangir‚ it seems‚ was not the change the organization had been anticipating.

But Jahangir is a change. The lawyers’ community is now a powerful pressure group. Having tasted blood when it fatally weakened former president and strongman Pervez Musharraf‚ it is now a union that yields readily to lawlessness‚ partisanship‚ and closed-mindedness. Hallowed by its struggles against Musharraf and then Zardari‚ the senior judiciary had also begun seeming like it would brook no dissent and tolerate no difference of opinion over its actions and judgments. As part of the judicial system‚ bar associations are perhaps best placed to recalibrate the system’s internal equilibrium. It is the objective of the SCBAP “to uphold the rule of law and the cause of justice and protect the interests of the legal profession as well as [those] of the public.” Jahangir has been doing this all her professional life‚ and she’s not going to stop now.

Jahangir’s win symbolizes the defeat of hate‚ and could shame Pakistan’s silent majority into speaking up in defense of our common freedoms. Let’s at least celebrate for the right reasons.

Hussain is a cardiac surgeon and editor-at-large of Newsweek Pakistan. From our Nov. 15‚ 2010‚ issue.