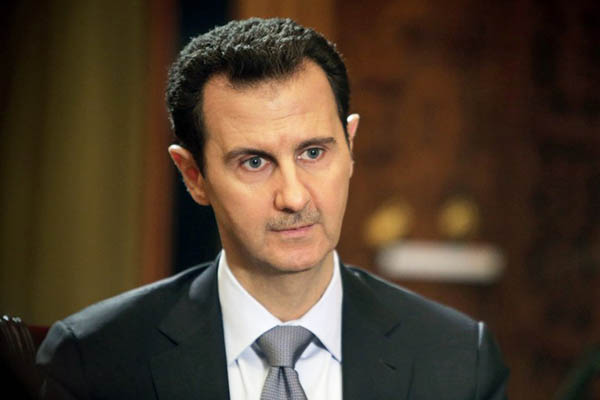 Syria’s Bashar al-Assad, whose forces have recaptured all but a fifth of east Aleppo from rebels, including its historic center, said victory in the city would be a “huge step” toward ending the war. But in an interview to be published on Thursday by Syrian daily Al-Watan, an early copy of which was seen by AFP, the president talked up a regime victory in the northern battleground city.

Syria’s former economic capital and industrial hub, the city of Aleppo lies at a strategic commercial crossroads near the border with Turkey. “It’s true that Aleppo will be a win for us, but let’s be realistic—it won’t mean the end of the war in Syria,” he said. “But it will be a huge step toward this end.”

A rebel loss in Aleppo “will mean the transformation of the course of the war across Syria,” he told the newspaper, which is close to the government.

A fierce offensive launched last month has seen Assad’s forces move closer than ever to retaking all of Aleppo and winning their most important victory yet in the civil war that began in 2011. Rebel fighters, who seized east Aleppo in 2012, have suffered devastating setbacks there in recent days, losing about 80 percent of their former territory, including the historic Old City, said the Syrian Observatory for Human Rights.

Six western powers—Britain, Canada, France, Germany, Italy and the United States—said on Wednesday that a humanitarian disaster was “taking place before our very eyes” in Aleppo. They called for an “immediate ceasefire” to allow aid to reach eastern Aleppo and accused Damascus and its backers, especially Russia, of blocking emergency help.

Aleppo is being subjected to daily bombings and artillery attacks by the Syrian regime supported by Russia and Iran, they said, adding that hospitals and schools “appear to be the targets of attack in an attempt to wear people down.”

U.S. Secretary of State John Kerry was to hold fresh talks with Russian counterpart Sergei Lavrov in Hamburg, Germany, later on Wednesday on efforts to halt the fighting.

Cornered in a pocket of territory in the city’s southeast, rebel factions issued a joint statement calling for an “immediate five-day humanitarian ceasefire.” They also called for “the evacuation of civilians who wish to leave” the city’s east to rebel territory in northern Aleppo province.

But asked about the possibility of a truce in Aleppo, Assad told Al-Watan: “It’s practically non-existent, of course.”

“The Americans in particular are insisting on demanding a truce, because their terrorist agents are now in a difficult situation,” Assad told the paper.

Opposition fighters have rejected talk of leaving Aleppo, and Assad’s government has said it will not agree to any ceasefire without a full rebel withdrawal.

The army extended its advances on Wednesday afternoon, with state media saying government troops had taken control of the Bab al-Nayrab, Al-Maadi and Salhin neighborhoods. Remaining rebel-held districts were coming under heavy bombardment, an AFP correspondent in the area said.

Moscow and Washington have traded blame this week over a series of stalled efforts to bring about a ceasefire. Moscow is a key Assad ally and launched an air war in support of his forces last year, while Washington and other Western nations have supported rebel forces.

The Aleppo assault has prompted a mass exodus of residents, with the Observatory saying at least 80,000 have now fled their homes. That includes residents who had sought refuge in the government-held west of the city and a Kurdish-controlled enclave, but not those who fled to remaining rebel territory, it said.

“The situation was very difficult,” said Um Abdu, 30, as she left the Bab al-Hadid neighborhood with her husband, five children, mother and siblings. “We lived on edge for the last four days,” she told AFP. “The gunmen were using us to protect themselves… but then the army came and we were able to leave.”

The government offensive has killed 372 people in east Aleppo, including 45 children, the Observatory says. Rebel fire into the west of the city has killed at least 92 people, including 34 children, in the same period, it says.

The city’s surgeon-general Fawwaz Hajjo told AFP that seven children were among 12 more people killed on Wednesday in rebel rocket attacks. More than 300,000 people have been killed since the conflict began, and over half the population has been displaced, with millions becoming refugees.