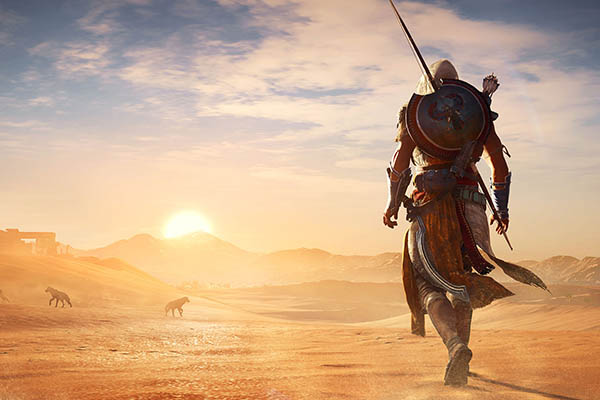 Video game titan Ubisoft on Friday released a new installment of Assassin’s Creed, seeking to reignite passion for the game after a year off to freshen its top franchise.

Breaking from its pattern of annually releasing sequels to Assassin’s Creed, which has sold more than 100 million copies since the first version debuted in a decade ago, Ubisoft took an extra year to craft Assassin’s Creed: Origins.

The new installment is set in Egypt at a time when Cleopatra is ascending to the throne, and reveals how the brotherhood of assassins began. “From the beginning, the Assassin’s Creed franchise has always explored pivotal moments in history, from the Third Crusade to the Italian Renaissance, and this year ancient Egypt,” said Origins creative director Jean Guesdon.

Work on the game began four years ago, with the team setting out to provide a fresh, new experience to players in a franchise showing signs of waning enthusiasm given its perennial release schedule. “We really wanted to rework the major systems,” Origins producer Julien Laferriere said while providing AFP an early look at the game at the E3 video game trade show earlier this year. “We feel we have a meaty, very modern game.”

The game’s fighting system was redesigned, and imbued with artificial intelligence making enemies more wily and giving characters virtual lives of their own complete with responsibilities such as farms to tend and families to feed. In keeping with its style, Ubisoft made animals part of the action so tending to laundry at a river could lead to being attacked by a crocodile.

“We wanted to be as authentic as we could,” Laferriere said of the game. “The world feels alive, and you can explore it at your own pace.”

Along with visiting pyramids and the Sphinx, players were promised “a front row seat” to the formation of the brotherhood of assassins.

It will be available for Xbox and PlayStation game consoles as well as for Windows-powered PCs.

An update to the game set for release early next year will add a “discovery tour” that gives players to option of taking virtual guided tours of ancient Egypt and learning its history, according to Guesdon.

Assassin’s Creed is Ubisoft’s most popular franchise. Putting out a new version of the game each year stretched the overarching storyline, which features modern-day descendants of assassins whose genetic memory is being mined to solve a bigger mystery. The previous installment, Assassin’s Creed Syndicate released in 2015, was set in London during the Industrial Revolution.

The action role-playing games are known for historical fiction, setting adventures at significant points in time such as the Crusades and the French and American revolutions. The franchise has grown to include novels, comic books, mobile games and films.

Blockbuster video game sequels, like movies, face the challenge of adding new excitement while remaining true to old aspects loved by fans. Assassin’s Creed has been credited with inspiring other games, such as Middle-earth: Shadow of Mordor, by Warner Brothers Interactive Entertainment.

A total of $1.2 billion was spent in the U.S. on video game hardware, software, and accessories in September in a 39 percent increase from the same month last year, according to industry tracker NPD. The amount of money spent on video game software alone was up 49 percent to $744 million in the same comparison, with Destiny 2 the top-selling game, NPD reported.