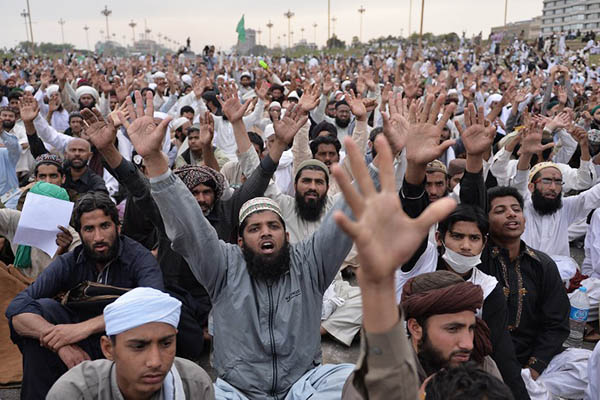 Thousands of supporters of an executed assassin continued to stage a sit-in in Islamabad on Monday after submitting a list of demands including the execution of a female Christian blasphemy convict.

Mumtaz Qadri was hanged on Feb. 29 for killing then governor Salmaan Taseer over his call for blasphemy reform, in what analysts said was a “key moment” in Pakistan’s long battle against religious extremism. But it also exposed deep religious divisions in the conservative country of 200 million.

An estimated 25,000 supporters of Qadri, a former police bodyguard, forced their way into the capital from Rawalpindi, where they had gathered Sunday afternoon to offer prayers. By evening they were engaged in violent clashes with police and paramilitary troops, who used heavy tear-gas shelling in an unsuccessful attempt to prevent them from pushing closer to the city center.

On Monday, around 3,000 protesters, many carrying sticks, remained at the city’s main Constitution Avenue close to key government buildings, including the presidency and parliament, which were guarded by soldiers. Protest leaders were making speeches on a makeshift stage, as supporters drank tea from plastic bags and washed themselves using water bottles.

Their demands include the execution of Aasia Bibi, a Christian mother-of-five who has been on death row since she was convicted in 2010 of committing blasphemy during an argument with a Muslim woman over a bowl of water. They are also calling for Qadri to be officially declared a “martyr” and want the immediate imposition of Sharia law.

The federal government has declined to respond to any of the demands, and the standoff is ongoing.

Sit-ins, or “dharnas,” are a popular form of political protest in Pakistan, gaining new popularity since the opposition Pakistan Tehreek-e-Insaf party headed by ex-cricketer Imran Khan held a sit-in outside parliament for 126 days in 2014 to call for fresh elections, a demand that was not met.