Asterix Teams Up With Assange Inspired Journalist in New Opus 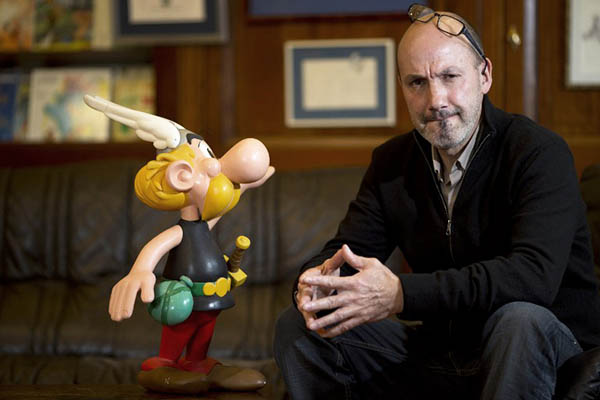 The 36th edition in the adventures of Asterix and Obelix will have 4 million copies in print.

Asterix and his friend Obelix are once again poised to set the Roman Empire on fire with the global release of a new opus that sees them team up with a journalist modeled on Julian Assange.

After their last escapade in Scotland, the boisterous Gauls will be back in their homeland in Asterix and the Missing Scroll, fighting alongside a reporter inspired by the real-life WikiLeaks founder to counter a propaganda war launched by their Roman foes.

The 36th edition in the hugely-successful Asterix series, which features the adventures of an indomitable tribe of Gauls resisting Roman occupation, comes out on Oct. 22 in countries the world over, including Brazil, India, the United States and Australia.

On the side of the “goodies”, Confoundtheirpolitix will be introduced for the first time as a journalist who works for the Condatum Echo. “Julian Assange was a model for this character,” said writer Jean-Yves Ferri, adding Confoundtheirpolitix was almost called ‘Wikilix’, in reference to the website known for revealing top secret documents. Wifix is another new addition to the series, the only well-read person in the village who devotes time to perusing the newspaper.

The first frame of the book depicts the postman—or Postaldistrix—delivering the Condatum Echo to Wifix, who starts reading the paper. “Rome, Caesar’s book published,” he says. “Caesar can write? I thought he was a soldier,” responds Obelix, who is strolling nearby.

The story revolves around Julius Caesar’s use of propaganda in a bid to finally conquer the small village after decades of crushing defeats. The emperor is aided by a nasty, deceitful adviser called Libellus Blockbustus, whose physical traits are strangely similar to those of French advertising magnate Jacques Seguela.

Libellus Blockbustus himself is aided by a stylish Egyptian butler, while a highly laid-back centurion will also make an appearance.

The new opus comes two years after the Gallic duo re-emerged from an eight-year absence in Asterix and the Picts, which took them to ancient Scotland for the first time and sold over 5.4 million copies in 15 countries and more than 20 languages and dialects.

Four million copies will be printed—half in French and the other half in foreign languages.

The Asterix series—created by illustrator Albert Uderzo and writer Rene Goscinny in 1959—is a bestseller in the comic book world, with some 365 million copies sold worldwide. Over the years, the two characters from ancient Gaul have met Cleopatra, drunk tea with the English, taken part in the Olympic Games, and eaten countless roast boar.

With the help of a Druid-brewed magic potion that grants them superhuman strength, they have also taken great pleasure in beating up scores of Romans.

The series has been adapted into live-action films and is the inspiration for a popular theme park, Parc Asterix, outside Paris.

It has always been an intimate affair and Uderzo, now 88, took over the writing when Goscinny died in 1977.

Uderzo, who quit drawing in 2011, said he was “blown away” by the new adventure and by the “extraordinary” work of Conrad, his successor.