Astronauts Chow Down on Space-Grown Lettuce 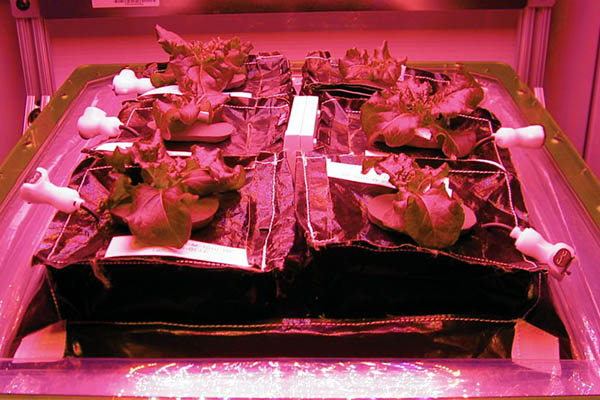 Scientists say growing produce on space missions is essential for allowing humans to visit other planets.

Astronauts living at the International Space Station took their first bites of space-grown lettuce on Monday, in what scientists described as another step toward enabling human missions to Mars.

“That’s awesome,” exclaimed NASA astronaut Kjell Lindgren, after he ate a piece of red romaine lettuce that was grown in a special box aboard the orbiting outpost. “Tastes good,” agreed U.S. astronaut Scott Kelly, who is spending one year at the research station. “Kind of like arugula,” Kelly added, then used small bottles to spread extra virgin olive oil and balsamic vinegar on his leaf, much as one might spread ketchup and mustard on a hot dog.

NASA says that if space explorers can grow their own food while they are away from the Earth they would be more likely to survive the rigors of deep space exploration, which can last months or even years. With no way to resupply a spacecraft making a long journey to and from Mars, the ability to cultivate food during the trip will be key to survival, said Kelly.

“This payload, and having the ability for us to grow our own food is a big step in that direction,” he said.

Ray Wheeler, NASA’s lead scientist for advanced life support activities at Kennedy Space Center in Florida, also said fresh foods that contain antioxidants, such as tomatoes, blueberries and red lettuce, “could have a positive impact on people’s moods and also could provide some protection against radiation in space.”

The red romaine lettuce was grown in a special plant-growing box called a Veggie unit that was built by Orbital Technologies Corporation in Madison, Wisconsin, and was flown to space aboard the SpaceX Dragon cargo ship. The seeds are contained in rooting pillows, which come complete with soil and fertilizer.

Since water cannot be poured in space, a special irrigation system delivers moisture to the plant pillows from below.

The Veggie unit weighs about 15 pounds, is collapsible and expandable, and contains a light bank of red, blue and green LEDs to help plants grow.

Wheeler said that the idea for using LED lights to grow food in space dates back to the late 1990s. The seeds were “activated” by Kelly on July 8 and grew for 33 days.

On Monday, Lindgren donned blue gloves and used tongs to harvest the lettuce from its growing box, before attaching the leaves carefully to a tray. He cleaned them with citric acid-based, food-safe sanitizing wipes and handed them, in a resealable bag, to Kelly and Japanese astronaut Kimiya Yui.

They saved a couple of leaves for Russian cosmonauts Mikhail Kornienko and Gennady Padalka, who were outside the station doing a spacewalk.

“They will eat half of the space bounty, setting aside the other half to be packaged and frozen on the station until it can be returned to Earth for scientific analysis,” NASA said on its website.

A previous crop of lettuce was grown in space last year but was not eaten by astronauts. Instead, it underwent—and passed—food safety tests back on Earth.