At Least 32 Dead in Dhaka Protests for Blasphemy Law 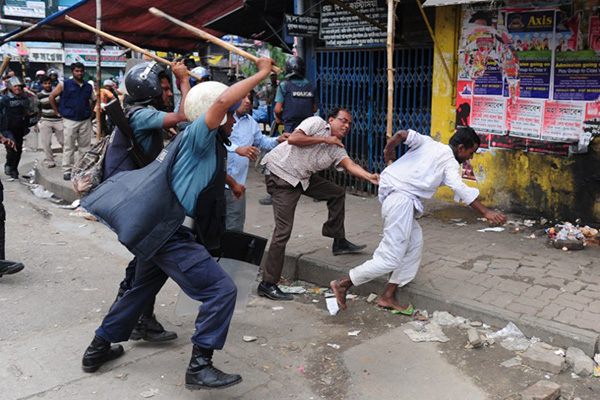 In Bangladesh, violence between religious hardliners and police has claimed 144 lives since January.

At least 32 people have died in street battles between Bangladeshi police and tens of thousands of Islamists, officials said on Monday, deepening the divide between the country’s secular government and religious hardliners.

The main Islamist group behind the protests said the death toll was much higher.

Hundreds more were reported to have been injured as riot police broke up a mass rally near a key commercial district in some of the fiercest violence to rock the capital, Dhaka, since the country’s independence four decades ago from Pakistan

Scores of bankers, insurance officials, and stock traders had to sleep in their offices as gunshots echoed around the Motijheel Commercial Area through much of the night. Witnesses said shops were torched while trees had been torn down and thousands of rocks littered the ground.

Police said they now had the situation under control in the city center, but further violence had broken out in other parts of Dhaka. They said they used sound grenades, water cannons, teargas and rubber bullets to disperse at least 70,000 Islamists who were camped at Motijheel as part of a push for a new blasphemy law. “We were forced to act after they unlawfully continued their gathering at Motijheel. They attacked us with bricks, stones, rods, and bamboo sticks,” said Dhaka police spokesman Masudur Rahman. He said the protesters dispersed early Monday.

Mozammel Haq, a police inspector at Dhaka Medical College Hospital, said 11 bodies were brought to the clinic. One victim was a policeman who had been hacked in the head by protesters with machetes, Haq said. Eleven other bodies were taken to three other clinics. Hospital officials said hundreds of people were injured.

There was also deadly violence at Kanchpur on the southeastern outskirts of the capital. More than 5,000 Islamists clashed with police and border guards, prompting security forces to respond with live rounds, said local police chief Abdul Matin. At least six people were killed there, including three policemen and a border guard, according to police official Rezaul Karim. “They were beaten to death,” he said.

The violence erupted Sunday afternoon after tens of thousands of Islamists demanding a new blasphemy law blocked highways and fought running battles with police. Prime Minister Sheikh Hasina Wajed has ruled out a new law, insisting she will not cave into the demands of hardliners who have been infuriated by bloggers whom they accuse of insulting Islam’s Prophet.

Chanting “God is Great” and “One point, one demand: atheists must be hanged,” activists from the hardline Hefajat-e-Islam marched along at least six highways, blocking traffic between Dhaka and other cities. Police said the number of protesters reached around 200,000 people at one point although the numbers had dwindled by the early hours.

Maulana Muin Uddin Ruhi, a spokesman for Hefajat-e-Islam, said the death toll from the violence across Dhaka was much higher than that given by police, but gave no exact figure. “Police shot live rounds indiscriminately at our unarmed protesters. Thousands of people were also injured,” he said.

Fearing further violence, Dhaka police on Monday banned all protests, marches, and mass gatherings as well as the carrying of firearms until midnight.

Bangladesh, an officially secular country with a 90 percent Muslim population, has seen a surge in violence between Islamists and government forces since the start of the year when a court began handing down war-crimes verdicts related to the 1971 independence conflict. Three leading Islamists have so far been convicted for their role in mass killings during the conflict. The overall death toll in violence between religious hardliners and the police since January now stands at more than 140.

Defining moment for Bangladesh, I hope they learn something from Pakistan’s past. Bowing down to Mullahs can only be destructive.