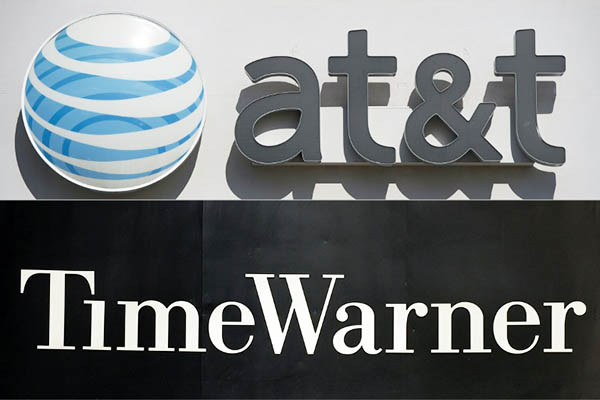 AT&T and Time Warner said Monday that their proposed mega-merger will benefit consumers as they gird for anti-trust challenges from politicians and regulators.

The merger, valued at $108.7 billion, will join one of the most dominant telecommunications company with a leading provider of entertainment video and broadcasting, allowing smoother and more innovative content delivery to consumers, the two said. But they will face tough questioning over whether such a combination will make the company too powerful, stifling outside video content creators while forcing consumers to their brand.

AT&T is, after Comcast, the second largest U.S. supplier of mobile phone, landline, Internet and pay television services. Buying Time Warner will give it control of top brands like Warner Bros, CNN, HBO, Cartoon Network, TNT, and a host of top-rated shows that the combined company will be able to deliver over multiple platforms.

The chief executives of both companies said Monday that this would lead to more seamless and innovative entertainment delivery to consumers, and allow advertisers to better target the right audiences. “We need to go where the consumers are going, and that’s increasingly mobile,” said Time Warner Chairman and CEO Jeff Bewkes in a conference call.

Time Warner has traditionally delivered its programs and films via cable televisions subscriptions, but increasingly consumers are turning to watching via Internet or mobile connections.

Randall Stephenson, AT&T’s chairman and CEO, said on the same call that negotiating rights with content suppliers to deliver their programming to new outlets on top of cable had been too onerous, and that owning the content would cut out that barrier. The merger “would really remove a lot of the friction in the industry,” he said. “Now we can begin to innovate our content much quicker.”

“Ownership is always best,” he added.

The two stressed that the combination should pass regulatory muster, as the Department of Justice plans an antitrust investigation, senators have announced hearings, and the Federal Communications Commission could also weigh in.

The merger is a “vertical” combination of two different businesses into the same organization, they said. Recent Justice Department challenges to mergers have mostly focused on “horizontal” combinations joining two companies competing in the same businesses. “The legacy separation between video and distribution is really getting in the way of what consumers want,” said Bewkes.

After the deal was announced Saturday public interest groups, politicians and regulators signaled tough scrutiny of the deal.

Republican presidential nominee Donald Trump said he would block it if elected. “It is too much concentration of power in the hands of too few,” he said.

Tim Kaine, who is running for vice president paired with Democrat Hillary Clinton, said he “share[s] the concerns and questions,” of others over the deal.