Attack on Army Vehicle in Quetta 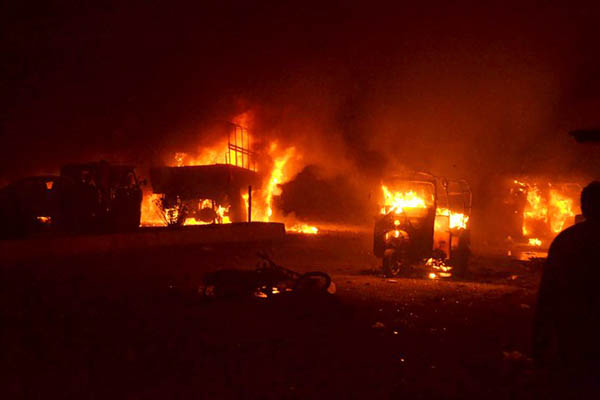 At least 15 people dead, 32 others wounded

A powerful blast targeting a military vehicle on Saturday night killed at least 15 people and wounded 32 others in in Quetta, officials said, in an attack claimed by the Islamic State group.

The blast occurred at a bus stop in the capital of Balochistan province and the area caught fire soon after the explosion. A statement by the Pakistani military said the explosion targeted an on-duty vehicle and set several other vehicles on fire.

“Incendiary explosive was used. As a result nearby vehicles caught fire. Fifteen people including seven civilians were martyred,” the statement said.

The Islamic State Khorasan Province—the Middle Eastern group’s affiliate in Afghanistan and Pakistan—released a statement claiming the attack, according to the U.S.-based monitoring group SITE.

A suicide motorbike bomber was behind the blast, the statement said.

The local affiliate has been known to work with Pakistani militant groups in previous attacks.

Minister Bugti said firefighters were still working to put out the blaze. The nature of the blast could not immediately be determined but an investigation was underway, he said.

The blast came two days before Pakistan’s 70th Independence Day, and the military chief said it was an effort to mar celebrations. “Our resolve won’t succumb to any challenge,” he said in a statement.

Militants in past have carried out big attacks on Independence Day and other events of national importance. Islamic State militants and the Taliban have attacked Quetta city in the past.