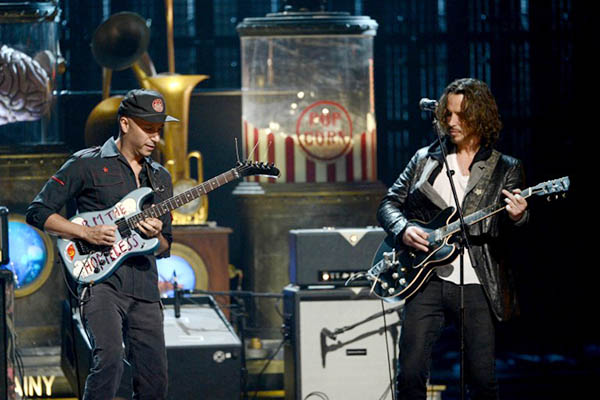 Rock super-group Audioslave on Wednesday announced its first concert in more than a decade as part of protests against Donald Trump’s presidential inauguration.

Audioslave—fronted by Soundgarden’s Chris Cornell with guitarist Tom Morello and other members of Rage Against the Machine—will play the “Anti-Inaugural Ball” on Friday in Los Angeles. The show will be led by Prophets of Rage—a newer super-group that brings together Morello with Public Enemy rapper Chuck D. and Cypress Hill rapper B-Real.

The Anti-Inaugural Ball, which will be livestreamed and raise funds for a group working against sexual assault, will also feature veteran protest artist Jackson Browne, Hollywood star and singer Jack Black and rapper Vic Mensa.

Cornell is one of the most prominent singers and guitarists of Seattle’s grunge era. In forming Audioslave in the early 2000s, he brought in much of Soundgarden’s classic rock sound, to which guitar virtuoso Morello added his charged solos. While Audioslave took part in protest shows, the band was not as intensely political as proudly leftist Rage Against the Machine.

Audioslave last performed in 2005 and, after the band released a third album a year later, Cornell announced his departure from the band, citing personal differences.

Prophets of Rage came together last year with political anthems amid the bitter presidential election, with the motto: “Dangerous times demand dangerous songs.”

Among other protest shows around Trump’s inauguration, melancholic indie rockers The National and Sleater-Kinney, a major force in the feminist “riot grrrl” punk scene, will perform in Washington. The groups announced they will play Washington’s celebrated 9:30 Club on Saturday after a major march led by women, with proceeds to go to Planned Parenthood, the reproductive health provider opposed by many Republicans for its support of abortion access.

A separate benefit concert for Planned Parenthood and the American Civil Liberties Union will take place on Thursday in New York with other major names in indie rock including Beirut and Sharon Van Etten.