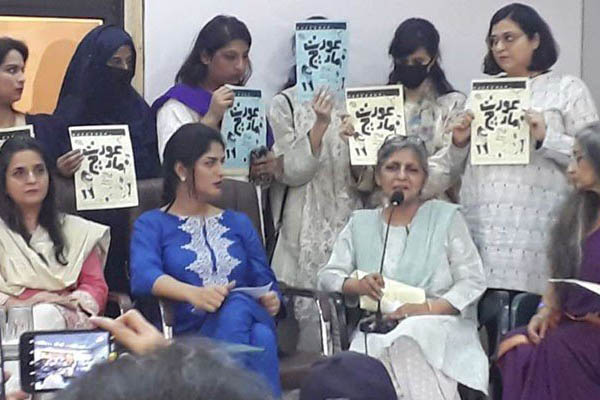 The organizers of the Aurat March 2020 launched on Thursday the protest movement’s manifesto, with a focus on ‘Khud Mukhtari’ (independence).

The 15-point manifesto, which has also been shared widely via the social media accounts of the Aurat March, demands an end to IMF-sponsored economic policies and budgets cuts, as well as immediate control of inflation of food items.

It also demands a minimum wage of Rs. 40,000 and the provision of safe and equal workplaces. The manifesto wants to decriminalize defamation laws to ensure they are not used to silence survivors of sexual violence; it seeks an expanded definition of the workplace in anti-harassment laws to include independent contractors and informal labor; criminalization of domestic violence across Pakistan, as well as setting of 18 as the minimum marriageable age for all persons and a halt to forced religious conversion; amendments to anti-harassment laws and sexual assault laws to include all genders as potential complainants.

In addition, the manifesto seeks “concrete actions be taken by the state to curb child sexual abuse and exploitation through effective laws”; anti-discrimination laws to ensure no one is targeted on the basis of sex, sexuality, class, race or disability; demilitarization of campuses in the name of security; justice for families of disappeared persons; Kashmir’s right to self-determination; community-led commissions to deal with violence cause by state and non-state actors, with a focus on gender-based violence; effective implementation of the Transgender Persons (Protection of Rights) Act 2017.

Finally, the manifesto wants all laws impinging on civic freedoms, such as freedom of expression and assembly, to be immediately repealed and an end to censorship of media and online spaces; and it wants the preservation of, and transparency from big corporations on the use of natural resources.

To further questions from reporters about whether the slogan was part of their manifesto, members of the organizing committee began chanting it loudly, suggesting that while it may not be explicitly stated, it was not against their ethos.

One of the organizers, Neelum Hussain, said that it was natural for those in power to be fearful of demands that challenge the status quo. “Journalism is male-dominated and so they did not want to listen to our demand,” she said. The activists also delved into the double standards of society, saying that when Khadim Rizvi of the Tehreek-e-Labaik Pakistan swore on TV and insulted large swathes of people, no one voiced any complaint. However, they added, calls for women’s rights always appeared to provoke a backlash.

The westernization of our culture is a colonist and imperialist phenomena. Struggle for the rights of downtrodden, including women, is legitimate. The question is that cultural face it portrays is not congruent with the most deprived classes of women who are mostly alienated from these events. On deeper analysis it is obvious that most enthusiastic participants usually have their personal psychological reasons including power struggle with the men in their lives. Some of them are just copying a western trend.and feeling good about it..Many strong proponents actually have questions about their sexual orientation. In short in a country like Pakistan too much emphasis on women vs. men and disregard for cultural norms is absolutely counter productive for women as well as left’s struggle for economic justice for all..