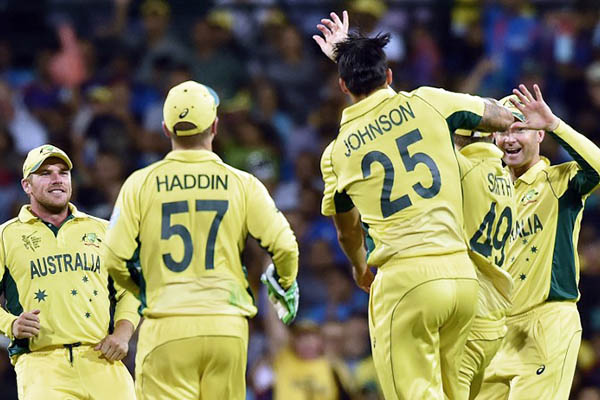 Australia will now take on New Zealand in the 2015 World Cup final on Sunday.

Australia will play fellow co-hosts New Zealand in Sunday’s World Cup final in Melbourne after they beat defending champions India by 95 runs at the Sydney Cricket Ground on Thursday.

Steven Smith’s 105 and his second-wicket stand of 182 with opener Aaron Finch was the cornerstone of Australia’s imposing 328 for seven, made after skipper Michael Clarke won the toss.

But India—unbeaten in their run to the semi-finals—fought back with paceman Umesh Yadav taking four for 72 before Mitchell Johnson smashed 27 not out off nine balls. India made a bold start to their stiff chase but lost two quick wickets after opener Shikhar Dhawan holed out for 45.

Mahendra Singh Dhoni, the India captain, rallied his side with a run-a-ball 65 until he was run out by Glenn Maxwell’s direct hit with only one stump to aim at.

India were eventually dismissed for 233.

New Zealand and Australia have already met at this World Cup, with New Zealand winning by just one wicket in a pool-phase thriller at Auckland’s Eden Park last month.