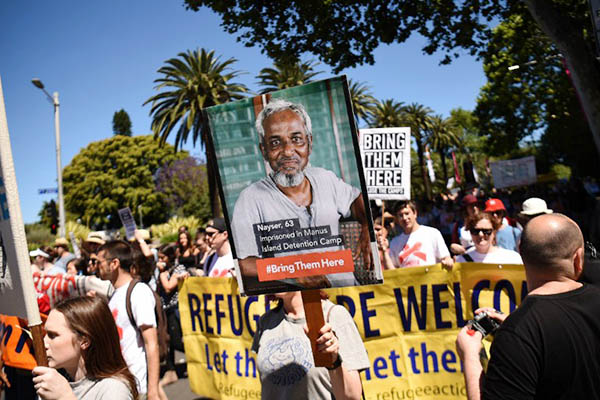 Aboriginal children are 24 times more likely to be detained than non-indigenous Australian children, Amnesty International said on Wednesday in a report accusing Canberra of complacency amid a raft of rights abuses.

From indigenous justice to offshore refugee processing and Canberra’s silence on the Trump administration’s promotion of waterboarding, the international rights group called on Australia to step up its efforts to defend human rights at home and abroad.

“Our government can’t be saying one thing on the one hand and commit to some human rights agendas such as global abolition of the death penalty, while carrying out policies of deliberate abuse and staying shamefully silent in the face of atrocities on the other,” said Claire Mallinson, national director at Amnesty International Australia.

The report condemns the justice system’s treatment of Aborigines, who make up about three percent of the total population of 24 million, and are among the most disadvantaged Australians. Indigenous adults are incarcerated at a rate of 15 times that of non-Aboriginal adults, Amnesty said, while at least five Aboriginal people died while in custody in the past year.

Amnesty highlighted a case at the Don Dale detention center in Australia’s north that sparked a government inquiry after video emerged last year of mostly indigenous boys being tear-gassed and mistreated in 2014 and 2015. The rights group took aim at controversial offshore refugee processing, saying that a deal brokered with the United States to resettle an unspecified number of the 1,600 people detained by Australia on remote Pacific islands meant Canberra “finally acknowledged that Australia’s hardline policy is untenable.”

The scathing human rights assessment comes on the heels of an admission from Prime Minister Malcolm Turnbull last week that Australia was failing in efforts to improve Aboriginal lives, with a report showing the government missing key targets, including cutting child mortality and raising life expectancy.