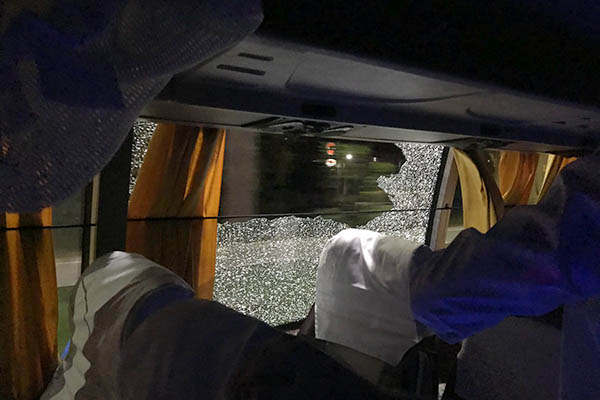 India’s sports minister on Wednesday sought to reassure Australia’s cricketers about their safety after a rock shattered a window on the bus taking them to their hotel after a series-leveling win in the second Twenty20 international.

The incident in the northeastern Indian city of Guwahati was the second in two months, after Cricket Australia said in September that the team’s bus window was broken by a “small rock or stone” in Bangladesh after a Test match.

“Pretty scary having a rock thrown through the team bus window on the way back to the hotel!” batsman Aaron Finch tweeted after the eight-wicket win against India. The photo he posted on Twitter showed a shattered windowpane with a large hole.

Indian Sports Minister Rajyavardhan Rathore, an Olympic silver medalist in shooting, said there were tight security arrangements in place for the Australian team. “Personal security of visiting athletes & teams is extremely important for us,” he tweeted. “Guwahati stone-throwing incident NOT reflective of our security measures. Aus team & FIFA are content w/those. India remains a graceful host.”

Cricket Australia’s news site cricket.com.au said no one was hurt when the window was broken by a rock roughly the size of a cricket ball, but the Australian players were “understandably shaken up.”

A CA spokesman told AFP they were “satisfied with the levels of security provided.” The final T20 game will be played in Hyderabad on Friday.