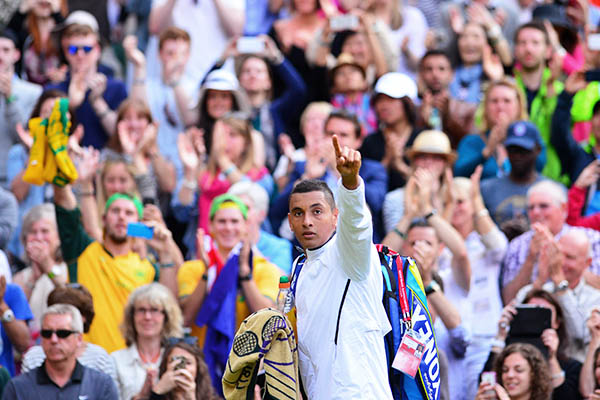 Sports-mad Australia hailed Wimbledon sensation Nick Kyrgios as its new hero on Wednesday, lavishing praise on “a good bloke” who has the game to beat the best. Kyrgios, just 19 and ranked 144 in the world, stunned world number one Rafael Nadal 7-6 (7/5), 5-7, 7-6 (7/5), 6-3 in one of the biggest upsets the tournament has ever seen.

His improbable victory set up a quarter final against huge-serving Canadian eighth seed Milos Raonic, sending the Australian media wild. “Astonishing. Remarkable. Extraordinary. Insert your own superlative,” gushed the Sydney Morning Herald. “Game and confidence-wise, Kyrgios has it all.”

The lanky Kyrgios, who gave up a promising career in basketball to focus on tennis, become the first wildcard in 10 years to make the last eight at the All England Club. He is also the first player ranked outside the top 100 to defeat a world number one since Andrei Olhovskiy stunned Jim Courier in the Wimbledon third round in 1992

“Australia, we have a new hero,” said the Sydney Daily Telegraph. “In a performance that reverberated from the heart of the All England Club across the world, the 19-year-old from Canberra has pulled off one of the greatest upsets in tennis history.”

Australia has been desperate to find a new tennis star with veteran Lleyton Hewitt having potentially played his last Wimbledon and Bernard Tomic widely seen as arrogant and not well liked. “One doesn’t want to gush unseemingly, but this bloke is the goods,” said Herald columnist Peter FitzSimons, referring to him as “Our Nick.”

“And no yellow Ferraris in sight!” he added in reference to Tomic. “Though Australian tennis has labored long, she has at last given birth to the first player since Pat Rafter that we won’t have to learn to love, but can love from the first.”

Even Prime Minister Tony Abbott was impressed. “Extraordinary performance @NickKyrgios. Australia couldn’t be prouder of you – what a win & what an amazing attitude!” he tweeted.

The Canberra-based Kyrgios, whose father is a Greek-Australian and his mother a Malaysian-Australian, first picked up a racquet aged four and has never looked back. “I’ve never been so shocked and overwhelmed at the same time,” his younger sister Halimah, who was in the crowd, told reporters after the game. “I actually cried, burst into tears and I’ve never felt so happy for someone my entire life.”

Kyrgios said he was fired up by an interview his mum Norlaila gave to Australian television before the match saying she believed Nadal was too good for him. “Slowly sinking in. What an unreal day … Massive team effort,” he tweeted early on Wednesday.

Meanwhile, Rafael Nadal has said that he won’t turn his back on Wimbledon despite his third successive flop. The undisputed king of the French Open, where he has nine titles and owns a staggering match record of 66 wins to just one defeat, the 28-year-old Nadal is enduring diminishing returns at the All England Club.

Champion in 2008 and 2010 and runner-up for a third time in 2011, Nadal was beaten in the second round in 2012, the first round last year and fell in the last-16 to Kyrgios on Tuesday. His record at the tournament now stands at 39 wins and eight losses while he has a similar 41-8 at both the U.S. Open and Australian Opens.

Nadal remains confident he can win another title at Wimbledon, a belief fueled by having injury-free knees which have been tested to the limit in London where the ball bounces lower, increasing the stress factor on his suspect joints. He also pointed to only dropping serve once against Kyrgios in a match which came down to a serve and return contest as the teenager blasted 37 aces and 70 winners past the shell-shocked Nadal.

“I tried my best, as always I do when my physical performance gives me the chance to try my best. The last two years I didn’t have that chance to try my best because my knee was not right to compete,” said Nadal. “But this year I felt the knee was right to compete. I competed and I think I competed well. It was not enough, but that’s sport. The opponent was better than me. Life continues.”