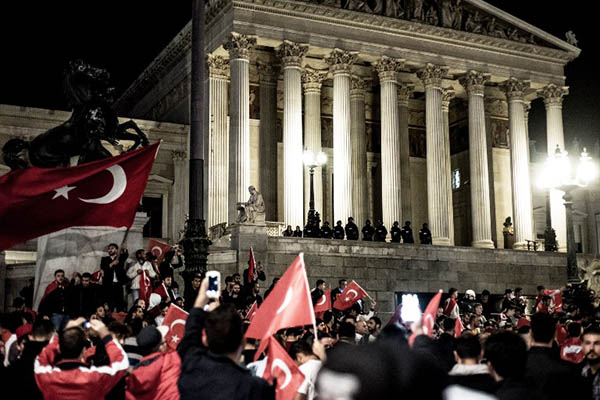 Erdogan-supporters demonstrate in front of parliament in Vienna. Christopher Glanzl—AFP

Mayor claims he does not want foreign politics to be ‘imported’ to Wiener Neustadt as Turks display pride following failed coup attempt.

An Austrian mayor demanded on Friday that Turkish residents “immediately” stop displaying national flags in windows and on balconies, saying foreign politics had no place in his city.

Following last week’s coup in Turkey, many of Austria’s 300,000-strong Turkish community hung red flags with a white star and crescent from their homes including in Wiener Neustadt, 60 kilometers south of capital Vienna.

Around a fifth of the city’s 43,000 inhabitants are migrants, with Turks making up the majority.

Mayor Klaus Schneeberger of the conservative People’s Party said he did not want “current developments in Turkey to be imported” into Wiener Neustadt. “I therefore call on all those who have put up Turkish flags on their homes or balconies to remove them at once,” he wrote in an open letter sent to Turkish community groups and council estates.

Schneeberger said the city’s “decades-old traditions and values” had to be protected in the face of the massive migrant influx. “Wiener Neustadt is an open, tolerant city. However, the issue of integration is one of the greatest challenges of our time,” he said. “Those who don’t commit to Wiener Neustadt have no place in our city, just like Turkish flags have no place outside of big sporting events.”

The Austrian government has repeatedly expressed concern over events in Turkey, which has imposed a state of emergency and detained or sacked tens of thousands of people after the failed coup against Turkish President Recep Tayyip Erdogan on July 15.

On Thursday, the foreign ministry summoned Turkey’s ambassador to discuss Ankara’s “increasingly authoritarian” behavior and allegations it had been behind largely pro-Erdogan protests in Vienna last weekend.