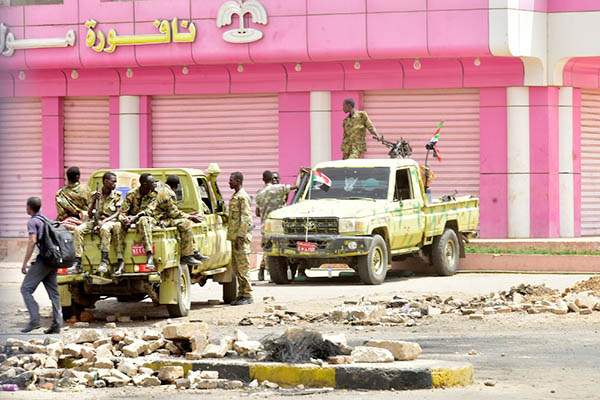 One week after dozens died in a crackdown on Sudanese protesters demanding civilian rule, four people were killed as security forces moved to quell a civil disobedience campaign launched on Sunday.

The deaths marked almost two months since the April 11 ouster of longtime ruler Omar al-Bashir, as talks broke down between protest leaders and military rulers over who should lead a new governing body—a civilian or soldier.

Protesters set about building roadblocks in Khartoum, while markets and shops were closed in other towns and cities. A doctors’ committee linked to the demonstrators said two people had been killed in clashes in the capital, while two others died in its twin city of Omdurman, just across the Nile.

The Central Committee for Sudanese Doctors blamed forces supporting the ruling military council for the deaths, which it said took the overall toll to 118 since a June 3 crackdown to disperse a sit-in by protesters outside army headquarters. The health ministry says 61 people died nationwide in Monday’s crackdown, 49 of them from “live ammunition” in Khartoum.

In the capital’s northern Bahari district, people gathered tyres, tree trunks and rocks to build new roadblocks as the campaign began early on Sunday. But riot police swiftly moved in, firing gunshots in the air and tear gas at demonstrators before clearing the makeshift barriers, a witness said.

“They opened the way, we closed it again, they opened it, we re-closed it. It was a game of cat and mouse,” said one protester, a 20-year-old mechanical engineering student.

The Sudanese Professionals Association, which first launched protests against Bashir in December, said the campaign would continue until military rulers transfer power to a civilian government. In Bahari district, onlookers saw a police truck full of people in civilian clothing, but it was not possible to confirm whether they were detained demonstrators.

Several residents said they faced difficulties but were still backing the campaign. “The roadblocks prevented me from reaching the market to buy vegetables,” said Hassan Abdelrahim, a vegetable vendor. “This will impact my income, but when I look at these youngsters who are on the streets since six months, I’m not angry even if I lose my income.”

The military blamed protesters for the deteriorating situation and vowed to deploy security forces to restore order.

The ruling military council “regrets the behavior” of the protest movement, Lieutenant General Jamaleddine Omar of the military council said in a statement broadcast on state television on Sunday. “The Military Council has decided to reinforce the presence of armed forces, RSF and other regular forces to help normal life return.”

Khartoum residents have mostly remained indoors since Monday, when men in military fatigues raided the protest camp. Several vehicles of the feared Rapid Support Forces, blamed by witnesses for the killings at the sit-in, were seen Sunday in various parts of Khartoum, riding pickup trucks mounted with machineguns.

“Security in Sudan now is worse than during Bashir’s regime,” said leading journalist Osman Mirghani, adding that the protest movement had become stronger after the bloodshed on June 3. “The way the sit-in was dispersed. That bloodshed was a crime. The way the bodies were tossed in the Nile, no one should get away with such a crime.”

Several airlines have scrapped their Sudan flights since the deadly raid and passengers were left waiting outside Khartoum airport’s departures terminal on Sunday, although it was unclear whether any flights would take off.

The downtown business district was largely shut and buses were not running in several areas, but private vehicles were ferrying passengers in some locations. In Omdurman, many shops and markets remained closed but people were seen buying provisions at some grocery stores.

“Troops were also seen removing roadblocks from some streets in Omdurman,” a witness said.

In the central city of Al-Obeid, the main market was shut and several bank employees did not report to work, residents said. In the town of Madani, southeast of the capital, people were seen queuing outside closed bakeries while the main market was also shut.

“I went to three bakeries and have been unable to buy bread,” a Madani resident told AFP by telephone.

It was the tripling of bread prices that first triggered protests against Bashir in December, which later turned into a nationwide movement against his ironfisted rule. After the president was ousted, demonstrators remained camped out for weeks in Khartoum to pressure the ruling generals into transferring power.

After several rounds of negotiations between protest leaders and the military, talks broke down in mid-May.

Witnesses say the subsequent assault on the sit-in was led by the RSF, who have their origins in the notorious Janjaweed militia, accused of abuses in the Darfur conflict between 2003 and 2004. Ethiopian Prime Minister Abiy Ahmed traveled to Sudan on Friday in a bid to revive negotiations, holding separate meetings with the two sides after which he called for a “quick” democratic transition.